Chosen of the Green Dragon

When Zhyzhak was born, she broke her mother's pelvis.[1] As she grew into a terrible werewolf, she was chosen as a champion of the totem of the Green Dragon and a Warder of the Trinity Hive caern – a hive actually situated in the gut of a colossal Thunderwyrm called Grammaw. Zhyzhak's madness manifests itself as klazomania (a mental illness that causes her to shout rather than speak), and it comes and goes as her mind becomes more and more filled with unholy voices.

Zhyzhak has been marked by several theurges of her tribe as a "chosen one". She is inhumanly strong due to her personal totem, and has shown to be capable of bending steel, splintering oak, and with minimal effort even killing a Crinos form Garou while remaining in homid form.[3] In battle she uses a devil-whip fetish named Btk'uthoklnto.

Furthermore, Zhyzhak was prophesied by Nhaukh, her packmate, to be the one who will crush the Last Gaian King (presumably Jonas Albrecht) under her heel. She defended her title as an Alpha of the Dragon's Daughter Pack at least once, when another werewolf called Pirog was bold enough to challenge her rule.[4] Among her known packmates is the deceased Bleeding-Eyes. 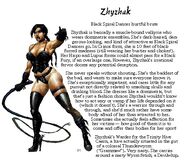 Zhyzhak doing what she does best

Zhyzhak and her pack. From Book of the Wyrm Second Edition. Art by Ron Spencer

Zhyzhak and the Guardians of the Trinity Hive

Zhyzhak from W20
Add a photo to this gallery

Retrieved from "https://whitewolf.fandom.com/wiki/Zhyzhak?oldid=241872"
Community content is available under CC-BY-SA unless otherwise noted.