Primogen of New York City
Zelios is a master mason and accomplished architect among the damned, famed for the construction of the geomantic web to bind Kupala into the Transylvanian soil.

The Clan Curse of the Nosferatu has afflicted him in a way to reflect his passion for stone and architecture: Zelios's skin has become extremely pallid; in fact, it is gray enough to match the color of a stone wall. His features are exceedingly angular, almost unnaturally so. There is no softness to his face, and his eyes are a dull gray.

Born into a family of wealthy merchants near the 11th century CE, Zelios turned away from pursuing a life of comfortable privilege in favor of developing a useful craft. He traveled Europe and beyond, learning the art and science of architecture.

His insight displayed his talent, for with a few words of advice to an architect or engineer, he could improve both the safety and aesthetics of any design. Zelios became famous among nobility and craftsmen alike, few realizing that his insight came from a recognition of the subtle ways of geomancy.

A Nosferatu realized the potential of the young man and decided to bring him into the Clan, so that he could improve the warrens his Clan populated. With eternity before him, Zelios immersed himself into his craft, specializing on constructing castles for Cainites lords, with hidden chambers and secret passages that some of his customers were completely oblivious of.

After he had constructed a castle near the Tihuța Pass in modern day Romania, he realized that he was indeed following ancient Ley Lines (oblivious that he was used by an ancient Nosferatu methuselah) and constructed a prison for something vile beneath the earth when he consulted Egyptian scriptures on the topic.

By the time of 1450, he was involved in many secret societies, among them the forerunners of the Craftmasons. By making alliances with the Followers of Set in order to learn more about the geometry of the temples of ancient Egypt, he learned about the arts of Feng Shui of the Middle Kingdom and traveled to China in order to be instructed in these arts.

On the encouragement of Vannevar Thomas, Zelios left for the New World after completing his occult studies in the Far East, becoming a primogen in the USA. As it turned out, his skills as a politician were not as developed as his talents as an architect. Not long after Zelios came to the New World, New York City fell before the claws of the Sabbat.

Before the Sword of Caine took over, however, Zelios had influenced the construction of a series of massive labyrinths beneath the city. Zelios continued to improve the sewer systems of the great cities on the North American continent, working alone for the sake of his craft and for the succor of his Clan.

Zelios mysteriously vanished from New York City in the 1990s, after he examined some alterations of his work by Nosferatu antitribu. He would not be seen again until the late 2010s, when he was discovered lying in torpor in a subterranean labyrinth beneath Griffith Park in Los Angeles. He has since been awakened, his body having been retrieved by Maximillian Strauss and taken into Camarilla custody. During his convalescence, he used his insight to help the city court diagnose the derangement Therese Voerman had placed on Vannevar Thomas, now Prince of the city. 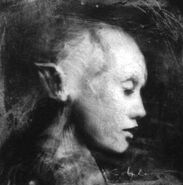 From Transylvania by Night. Art by Guy Davis

Zelios VTES card. Art by Samuel Araya
Add a photo to this gallery

Retrieved from "https://whitewolf.fandom.com/wiki/Zelios?oldid=242971"
Community content is available under CC-BY-SA unless otherwise noted.