Zayyat, the Sandstorm, is a 5th generation Gangrel methuselah of Arabia, the founder of the Wah'Sheen.

Zayyat is an ancient Tunisian Gangrel. Besides being the common sire or grandsire of all the Wah'Sheen of Arabia, very little is known of the Wah'Sheen patron's past, but he is called Abu Shammal ("Father of the Sandstorm") by those who fear him. Some say he travels through the desert's sandstorms unscathed, a pair of glowing eyes that burn through the lashing winds. Even the Assamites demand nothing of him or his brood, for Zayyat has always proved quick to anger and impossible to contain.

Long ago the methuselah has forged an alliance with a Spanish Nosferatu converted to Islam named Tarique who, in time, would become one of his closest friends. In their original encounter the two were involved in an attempt to apprehend Samir, a Bay't Majnoon of Al Ussa's brood, responsible for fooling the Qarmatians (a heretical Islamic sect) into stealing the sacred Black Stone set within the walls of the Kaaba. The theft silenced the Keening for two decades. During this 20 year-long quiet period, Zayyat, with the help of Tarique, fortified Mecca before any other Ashirra could lay claim to the city.

In the 12th century, Zayyat and Tarique fought successfully alongside Saladin against the Christian Crusaders. Once the war ended, however, Zayyat and Tarique returned to the Arabian Peninsula and watched quietly while the Mongol invasions swept through the Fertile Crescent. The Muslims of the Mideast had divided into fragmented tribes, and a lesson was due them as far as the two Ashirra were concerned. When Egypt fell to the Mamluk soldier-slaves, Zayyat and Tarique were more than happy to allow others to take the vanguard of the Islamic limelight. They were no longer interested in the tumultuous politics of the Middle East.

With the rise of the Ottoman Empire, Tarique was approached by the Ashirra Ventrue Abdul Rahmann, a prominent Ottoman Hijazi who had embraced Islam. Tarique drew up an accord with Rahmann that allowed the Ottomans to gain control of Western Arabia through the port of Jeddah. Secretly, however, Mecca and Medina remained under Tarique's guidance, while the desert tribes rested under the dominion of Zayyat. As the centuries passed, the Sauds had gained substantial power in central Arabia under the religious leadership of the iman al-Wahhab and his demand that Islam should return to its roots.

Rahmann clandestinely helped the Saud family regain control of Arabia. It was the efforts of Zayyat, Tarique, and Rahmann that brought about the united Arabia after World War I and the rule of the Saud family after whom Saudi Arabia is named. These three Ashirra managed to create a bulwark that prevented many power-hungry European vampires from claiming power in the region. Camarilla be damned, the Arabian Ashirra were not interested in the Masquerade, they were defending the Arabian Peninsula and Mecca. Since that time, Zayyat has remained with the desert bedouin. 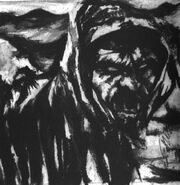 Zayyat, The Sandstorm VTES card. Art by Peter Bergting
Add a photo to this gallery

Retrieved from "https://whitewolf.fandom.com/wiki/Zayyat?oldid=209662"
Community content is available under CC-BY-SA unless otherwise noted.