The Zantosa, also known as Szantovich, are a large Revenant Family of Eastern European noble descent. The Zantosas have long served as the eyes and ears of the Tzimisce in the courts of Eastern Europe and within the Ottoman Empire.

Originally known as the Szantovich, the family was highly regarded and well-trusted. Known for its abundance of wealth and inclination towards cruelty, the family rose to power and held on to it until the Tzimisce clan collapsed during the Omen War. The Zantosa family quickly shifted its support to the Anarchs and, later, to the Sabbat. These Ghouls spread throughout the rest of Europe and provided the Sabbat with information on the activities of the Camarilla.

Today, most Zantosa are hedonists. Some are world travelers living the good life, while others are involved in the drug industry and slavery. However, Zantosas harbour a grave secret involving the Tzimisce Antediluvian... if this were discovered, the family would find itself at odds with the sect that continues to support it.

Tzimisce of nights past tended to have discriminating tastes when it came to who they granted vampiric immortality. Rather than leaving the discovery of suitable Childer to the whims of chance, those Tzimisce decided to breed their prospective Childer starting from their mortal birth.

The Szantoviches were originally bred for their social graces; when a Zantosa was Embraced as a Tzimisce vampire they retained their human-focused Presence as a Bloodline Discipline instead of gaining the animal-focused Animalism that mainline Tzimisce possess. (Each of the Tzimisce's "revenant" families similarly spawns a corresponding vampiric bloodline when Embraced).

Weakness: Zantosa may become obsessed with pleasure and sensation, and are easily addicted. 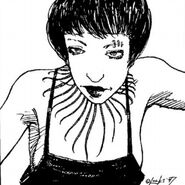 Retrieved from "https://whitewolf.fandom.com/wiki/Zantosa?oldid=238051"
Community content is available under CC-BY-SA unless otherwise noted.