Chevalier Yves Mercure is a member of the Sons of Ether, one of the few remaining Ethernauts on Earth in the Final Nights.

Born to a high-society family in France, Yves was a reclusive child, absorbed with reading. When he accidentally discovered his uncle's copy of the Kitab al-Alacir, he Awakened and joined the Sons of Ether.

Mercure saw magic as a way to act out the kind of adventure stories he loved to read about as a child, and in an void suit of his own devising he began to explore the Umbra and realms such as Hollow Earth. Mercure disdains most modern technology, particularly electricity, which he calls a "child of capriciousness"; instead, his inventions are usually powered by clockwork, magnets, or other more exotic energy sources. His greatest invention to date has been a clockwork android, who serves as his assistant.

In 2003, Yves was asked by Ernesto C. Amanguale to intercept Ernesto's younger self at Coral Castle, Florida. Yves ensured the sixteen-year-old Ernesto survived his accidental time-travel and returned to his point of origin without incident. In return, Yves asked if the adult Ernesto could perhaps introduce him to Niki Yemana.

Yves has an utter contempt for modern electronic and computers – these boring, lifeless things cannot evoke the semblance of life as can a mechanism. His life is devoted to building better and more intricate mechanical wonders. He is thin and pale, in his late 20s, with wispy, thin brown hair that he keeps at shoulder-length. He could not really grow much of beard, so he keeps himself fastidiously clean-shaven. His wardrobe is fairly fashionable, thanks to his family housekeeper, who buy this clothes for him. 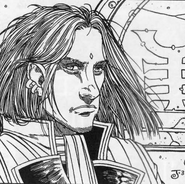 Retrieved from "https://whitewolf.fandom.com/wiki/Yves_Mercure?oldid=207255"
Community content is available under CC-BY-SA unless otherwise noted.