Xiao Mengli stands at the crux of many modern Akashic elements. She has no known past incarnations or karmic imprint in the Record, yet she takes to Akashic studies easily and naturally. She has a fierce temper yet remains fair and insightful even when angered. She has Chinese and quite traditional, yet she smoothly adopts modern conventions and customs when necessary.

Mengli is still young, no more than 21 or 22 years old. Her exact age remains unknown, as she comes from a provincial agricultural community in China that kept few records. When she arrived at the Bodhimandala in Beijing, the startled monks took her in and asked why she had come. "My feet came here because they knew the road already" was her reply. As a student of the Kannagara, Mengli excelled in stealth, combat skills, and the martial aspects of Do. She had a keen insight for the law. However, she remained rambunctious. Though she gave lip service to tradition and frowned at those who lacked patience or respect, she had little tolerance for excessive study. For a time she leaned in the direction of Li-Hai utilitarian philosophy before finally admitting to more Vajrapani tendencies. Once she had mastered the rudiments of Do and enough self-control to keep from getting into too much trouble, Mengli left the care of the Kannagara to "let her feet find the road again."

She disappeared from view for about three months, showing up in the United States with an alternate identity and a few contacts among other mages there. Over the next two years, she ran a smuggling ring, moving valuable artifacts, weapons and even people — relieving the Chinese government of an item with mystic significance, bringing an expatriate back to the country or just shuttling relics from one Bodhimandala to another. Older traditionalist Akashics purse their lips and frown at her lack of propriety or respect for the law, but they must recognize her value to the Sangha. She has managed to evade Technocratic notice (for now) and every year comes up with some valued artifact or scrap of knowledge from the Brotherhood's history, even if she has no memory of any of it. Where the road will carry Mengli next, even she does not know.

Xiao Mengli has the features of a classical Chinese woman, young and earnest, still well honed and slender from her early rural upbringing and martial training. Her eyes are dark and piercing, flitting from point to point – she is always suspicious that someone might be on to her smuggling. In battle, she sizes up the enemy, strikes to cripple and then flees with incredible litheness. She keeps her black hair short and out of her eyes. Depending on her surroundings, Mengli dresses either in a heavy overcoat and simple black shirt and pants, or else in a traditional Chinese dress. She learned early on the value of not standing out too much.

From the Tradition Book: Akashic Brotherhood. Art by Christopher Shy 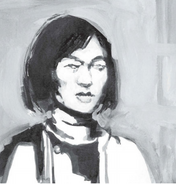