Disparate Alliance (M20)
The Wu Lung were once the masters among the Chi'n Ta of China, prizing themselves as heirs of the Yellow Emperor. Masters of Alchemy, the Celestial Bureaucracy and a special fighting technique known as Kuei Lung Chuan, the Wu Lung were nonetheless powerless to stop the advent of communism and the Technocratic Paradigm that ravaged their hold over China.

The modern Wu Lung have fled into the arms of the Traditions, joining either the Akashic Brotherhood or the Order of Hermes. As of M20, the remaining ones joined the new faction known as the Disparate Alliance.

The Wu Lung see themselves as speakers of humanity, interceding before the gods in their behalf. They are shih, sages whose Hun has transformed into shen, which enables them to communicate with their own revered Ancestors, who guide them on the path of Li (Righteousness). When a Wu Lung lives according to the tenets of Li, he will be subsumed into the T'ai Chi, the Absolute, in what Westerners refer to as Ascension.

The magical style of the Wu Lung is highly legalistic and bureaucratic. Every part of the cosmos works in a specific fashion, just so, as a result, every form of magic, every feat, no matter how insignificant, must be properly conducted and practiced, just so. Tradition is more than a way of life: Tradition preserves the uncorrupted means to petition and appease Heaven and the spirits. Thus, ornate regalia, precise writing, and exacting pronunciation are required to please Heaven, to fit the clockwork order of the cosmos, and to pull the appropriate forces into conjunction. Spells are carefully worded petitions to the gods

The Wu Lung believe in the Metaphysical Trinity, which they have dubbed Tiger (representing Dynamism), Dragon (representing Entropy) and Phoenix (representing Stasis), whose workings are described as the "Three Warring Kingdoms"

Once the undisputed masters of the supernatural in ancient China, the "dragon wizards" have seen their dominance of the eastern half of China diminish tremendously under the predations of communist atheism, the inadvertent adoption of the Five Elemental Dragons (most notably the Zi Guang) into the Technocracy and by the consolidation of their former rivals, the Akashic Brotherhood.

The Wu Lung claim that they came into being in the Fourth Age, when the first men awakened to the designs of Heaven and chose to involve themselves in the Celestial Bureaucracy. The greatest among them was the Yellow Emperor, who gave the people of China their first alphabet and agriculture. Chosen by the Zhong Lung, the dragon-spirits that were originally chosen by the August Personage In Jade to watch over humanity, the Wu Lung would become mankinds advocate before the Celestial Bureaucracy.

In 480 BCE, a corrupt Wu Lung named Yi Han began the Dragon River War, allying with the Yama Kings and the Wan Kuei. Ten suns burned in the sky while Yi Han sacrificed thousands to appease his masters. He was eventually stopped by Yi, a mysterious warrior who would found the demon-hunting order of the Shih. Following the conflict, a group of mystics abandoned their trappings, instead using their knowledge of the natural world to provide the people with the means to aid themselves. These would later give birth to the Dalou'laoshi, the Five Elemental Dragons of the East.

The Wu Lung split into cabals in the Era of Warring States, who sought to continue to practice their craft and find a way to end the chaos. In 221, the wizard Fu Xia became the advisor of the ambitious Quin Shihuangdi by promising him a way to make him immortal. Fu Xia united the Wu Lung in one Bureaucracy mirroring those of Heaven, while destroying the followers of other magical groups to ensure the supremacy of his followers. Fu Xia later devised the rituals that would allow his emperor to become Yu Huang and further devised the way to create the Immortal Guard.

The Dragon Wizards ruled the following Han Dynasty with an iron hand, driving the Akashic Brotherhood into seclusion, while the Dalou'laoshi became their vassals thanks to exchange with the practitioners of the Ars Preclarus in Rome. In 618 CE, the Wu Lung attacked the Shaolin Monastery, the capital of the Akashic movement. While the battle was fierce, the Akashics lost and scattered across Asia, settling in Japan and Mongolia in the process.

The years since the fall of the Tang Dynasty were a time of peace among the asian magicians, as the weak emperors provided little opportunities to harass one's enemies. When the Mongols conquered China, some among the Wu Lung, albeit grudgingly, searched for help, attending the Convention of the Ivory Tower that would give birth to the Order of Reason. As the Akashics became complicit in the rule of the Mongols, they were invited first to attend the Grand Convocation, which severely galled the Wu Lung and their shunning of any western ways. 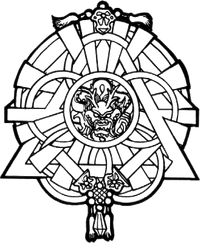 The Wu Lung conspired against the Akashics, offering their aid to the Manchurians and helping them overthrow the weak Ming Dynasty in 1644, following the retreating Akashics into Tibet and razing many of their monasteries in the process. Their allies among the Dalou'laoshi, however, betrayed them, feeding them misinformation about the West to aid the Technocratic Union to follow the colonialists and establish beachheads for further exploration. When Paradox crept in, the Dragon wizards were taken by surprise and proved to be easy prey for the West. When Japan invaded in the 1930s, the Wu Lung's power collapsed completely.

Communism proved to be the greatest enemy of the Wu Lung, as their belief in tradition and guidance by their ancestors fit quite poorly in the new system. The great social revolutions completely overturned the paradigm they had carefully cultivated for over 4,000 years, and now, they were helpless against the changes to come. Most fled to Hong Kong and Taiwan to plot their vengeance, but several others dispersed in the various chinatowns across the globe. The Avatar Storm severed the contact between the Dragon Wizards and the Celestial Bureaucracy, making the old ways nearly impossible to follow. Despite protests from many fronts, the Craft accepted teeth-gnashingly that they had to adapt in order to survive the coming Ages, beginning negotiations with their former enemies that were successful in 2000, enabling them to join the Traditions.

Now uneasily unified under the banner of keeping China's spiritual heritage alive, the Wu Lung have joined the Akashic Brotherhood as a sub-faction (some mages of the Craft were reluctant to join their former adversaries and joined the Order of Hermes instead, forming minor House Hong Lei). Despite this, they have shared little of their esoteric knowledge, keeping to themselves.

M20 presents the remainders of the Wu Lung as the last Craft to join the Disparate Alliance in order to avenge themselves for the centuries-old betrayal by the Order of Reason and reestablish their dominance in China with the aid of their new allies.

An unbending structure of master above student makes up the ladder of Wu Lung society. At the top is the T'ien K'ung te Huan Ti Wu Lung, or "Heavenly Emperor of the Dragon Wizards," who exercises supreme authority over the entire sect. He is given no other name, and indeed needs none; he is seen to be a direct servant of Heaven who enforces the will of the Celestial Bureaucracy on Earth through the magical bureaucracy of the Wu Lung. Since 2000, contact to the Heavenly Emperor has been lost thanks to the Avatar Storm.

Below the Dragon Emperor is the Feng Huang Hou Wu, the "Phoenix Empress-Wizard," who acts as consort to the Dragon Emperor; she is the only formally recognized female member of the Wu Lung, and her position is not replaced—rather, she reincarnates herself with each lifetime, to be raised once more to her proper position.

Next is the Hu Kuei Tsu Wu, "Tiger Lord Wizard," who commands the military forces of the magical society and acts as a sort of seneschal, rising to the position of Emperor should the current Emperor fall. Working with the Tiger Lord are eight Kieu Tsu, lords of other positions within the courts; each oversees a particular area of political acumen, such as Education or Tradition. Nine ministers, or Pu Chang, serve as overseers for the Spheres of magic. These ministers in turn select the Sifu, or teachers, who are Masters of their areas of study and who teach the Nan Wu (senior students) and Ch'uang Shih (junior students).

Advancement through the ranks comes in the form of difficult exams. In addition, the Wu Lung only introduced men into their society; women are considered inferior under the Legalist system, and are relegated to the status of peasant wizards (when magically talented women are acknowledged at all).

The Dragon School is comprised of the judges and attendants of the gods, who are masters of Spirit. Service in the Dragon School is a great privilege, and its members take their duty to judge Creation seriously, usually applying force to make things run smoothly. They harbour a great grudge against the Technocracy for destroying their hold over Asia and intend to pay them back.

The Tiger School consist of more practically oriented mages, focusing to find the Tao in righteous activities. They focus on Forces and are masters of martial arts they use to generate bravery that serves Heaven, similar to the Do of the Akashics.