White Wolf Wiki
Register
Don't have an account?
Sign In
Advertisement
in: Games, World of Darkness, Wraith: The Oblivion

View source
watch 02:52
Roblox: DeepWoken - The Loop
Do you like this video?
Play Sound 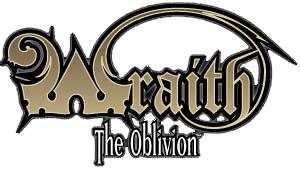 Wraith: The Oblivion places characters in the role of both recently and not-so-recently deceased spirits who have not yet passed on to their next life. Wraiths inhabit the Underworld, a reality which intertwines with our own reality where the dead can observe the living, but interfere with them only marginally.

Of all the White Wolf games, Wraith had the most troubled history. Mark Rein•Hagen stated early in the development of the game that he wanted players to feel uncomfortable playing it. As a result, Wraith uses several rules which are unique to the system and require advanced players, particularly the Shadow, which requires that each player in the troupe play as an antagonist to another player. Wraith is a demanding game for both players and Storytellers, and consequently had a limited audience throughout most of its history. Wraith ended several years before the other World of Darkness games, with the supplement Ends of Empire during the Year of the Reckoning.

Characters in Wraith are the spirits of the dead who have not been able to make peace with their pasts and Transcend. Every Wraith is bound to the Skinlands through a set of Fetters, physical objects which represent unresolved issues in the character's past. Wraith characters are created with specific plot points.

As spirits, Wraiths require no material sustenance but instead feed on emotions, fueling their existence through the use of Pathos, the energy of emotion. Wraiths acquire pathos by fulfilling their Passions, driving all-consuming emotions. A primary use of pathos is to fuel Arcanoi, which are the arts of the dead. Arcanoi include a variety of standard ghostly abilities such as poltergeist skills and the ability to communicate with the living, as well as skills which are more specific to Wraith society.

Wraiths carry their own worst enemy around with them, every Wraith is split into two personalities: Psyche and Shadow. The psyche is the personality of the Wraith, while the Shadow is the part of the Wraith that craves self-destruction and defeat. Shadows are intelligent foes, who can communicate, hamper and aid the Wraith all in order to fulfill their primary goal of making the Wraith serve Oblivion. Shadows have their own passions and feed on Angst, the stuff of negative emotions. Shadows can take over the Psyche temporarily (an act called Catharsis), and if a Shadow becomes too powerful, they can take over the Wraith permanently, turning the Wraith into a Spectre.

Being dead, Wraiths are tough. Instead of a body, a Wraith has a Corpus, manufactured out of plasm, the material of the underworld. Wraiths can heal most damage through Slumber, however if a Wraith takes too much damage (the equivalent of death), they are plunged into a Harrowing. Harrowings are surrealistic passion plays where the Wraith is psychologically tortured by their Shadow into surrendering. Harrowings can be triggered for other reasons besides damage, such as losing a Fetter.[1]

The Underworld is a bizarre dimension inhabited by Wraiths. It is broken into several discrete locations. Players begin and spend most of their time in the Shadowlands, which are a reflection of the living world where wraiths can interfere with the living. Necropoli, or cities of the dead, are sprinkled throughout the Shadowlands, usually as a ghostly counterpart of an existing city with a large population. Underneath the Shadowlands is the Tempest which is a giant storm of memory and madness that permeates the entire underworld. Somewhere in the midst of the Tempest is the Isle of Sorrows upon which rests the city of Stygia, the capital city of the Dark Kingdom of Iron - the lands of the western world's dead. Stygia has been built up since before the Roman Empire, and is now a giant necropolis housing uncounted dead; unlike other Necropoli, it does not have a living counterpart. Past Stygia are other islands in the Tempest, the most important of which are the Far Shores and the other Dark Kingdoms. The Far Shores are paradises built by the dead to help others seek Transcendence (or possibly not), while the Dark Kingdoms are the underworlds of other cultures, such as Asia, Africa and India.

Underpinning the entire underworld is the Labyrinth, a gigantic shifting maze which eventually merges with Oblivion, the end of all things. Oblivion is hungry and seeks to destroy Wraiths, both personally and organizationally. As a result, most of the Dark Kingdoms have developed methods to keep Oblivion from influencing their subjects and cities.

The Underworld has a bizarre set of laws which are more psychological than physical. Emotional qualities such as Pathos and Angst have physical qualities which can be used and moved. More critically, the underworld has a severe shortage of materials. While a small number of relics pass into the underworld when a wraith dies, the majority of things in the underworld are made of souls. While some of these souls are from mindless Drones, soulforging is a common punishment for wraiths who commit crimes, lose political fights, or have the misfortune to be in the way during a materials shortage. The coins of Stygia, the streets of Stygian roads, the armor and weapons used by almost all Stygian soldiers are made from those unfortunate souls who were thrown into the forges. While every wraith hopes that the forging process destroys consciousness, Stygian coins still mutter and moan.[2]

Most political organizations in the Underworld exist to stave off Oblivion. The most important of these in most Wraith games is the Hierarchy, which is the government of Western wraiths. The Hierarchy was founded by Charon, the first (and only) Emperor of Stygia.

Stygian society is based around the Legions, eight groups which provide both military and civil services for Stygia, and which decide on membership by dividing the dead by manner of demise.[3]

Opposing the Hierarchy are the Heretics, wraiths who espouse a particular religious perspective on the Underworld (the most famous of these being the Fishers, the wraiths of early Christians). Many Heretics put an emphasis on Transcendence as something all wraiths should work towards, and use their resources to assist others in their efforts.

Renegades are wraiths who oppose the Hierarchy for a number of reasons. Some actively rebel against the Hierarchy, while others simply wish to march to their own drum and do not wish to be involved in affairs of state.[4]

In addition to these divisions there are quasi-legal Guilds which espouse mastery of a particular Arcanos. The Guilds technically don't exist anymore, however their usefulness means that certain guilds are tolerated openly while others are forged on sight.[5]

Finally, there are the Ferrymen, the oldest society in the underworld and Stygia's brother organization. Also founded by Charon, the Ferrymen are agents of transcendence who aid and protect wraiths in the underworld. The Ferrymen have their own rules and goals, but they are respected by all parties both for their power and their purpose.[6]

Wraith ended in 1999 with Ends of Empire, which tied up the Wraith metaplot by initiating a war between the Dark Kingdom of Jade and Stygia, returning Charon to the underworld, and then transcending Charon. At the end of the book, Stygia has fallen apart but the Eastern dead are not doing much better.

The final fate of the Shadowlands also played strongly into the storyline of Orpheus. While Orpheus is not a sequel, it does have many points of interest to those familiar with Wraith.

Wraith is the most personally-oriented of all the White Wolf games; characters begin with several plot points in the form of Fetters. In addition, there is a definite "win" condition: Wraiths win the game by Transcending and lose the game by succumbing to Oblivion. That said, the entire game structure is designed to distract characters from Transcendence - wraith society is based on slavery and the eternal torment of the weakest souls, what is more impressive is that the majority of wraiths adapt to their strange environment and adopt rather sedate jobs in the Hierarchy.

Furthermore, there is in-setting debates about the value of Transcendence and while there is some guidelines on the matter, the details of the requirements vary depending on the Storyteller.