The Wolpertinger are German Gallain Fae for Changeling: The Dreaming .

The wolpertinger aren’t new to the Dreaming, but they are new to Kithain society. Until the Resurgence, they were a race of chimera birthed by dreams of mysterious, unknown creatures hidden away in the inaccessible wilderness. While they originated in Germany, their myth spread the world over, taking on many different names, such as jackalopes in the United States or skvader in Sweden. They were hunted as pests by the Kithain for their tendency to nest in freeholds and extinguish them.

The Glamour of the Resurgence fortified their dream so strongly they became a kith in their own right. Some wolpertinger believe that a great sacrifice was also involved, but try as they might, they can’t remember any details. Now, they’re trying to find their new place in the world — a task made more complicated because they try not to stay in one place long for fear of damaging the local freeholds.

Wolpertinger are hybrid creatures. They usually have the hind legs of a rabbit, wings of a hawk, and antlers of an elk, but other combinations of animals are known. They prefer professions that keep them close to nature such as biologists, ecologists, or park rangers. 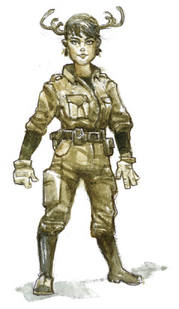 Wolpertinger C20
Add a photo to this gallery
Retrieved from "https://whitewolf.fandom.com/wiki/Wolpertinger_(CTD)?oldid=180543"
Community content is available under CC-BY-SA unless otherwise noted.