Werewolves are one of the three main supernatural races of the World of Darkness, and the protagonists of Werewolf: The Apocalypse scenario. They refer to themselves as the Garou.

Werewolves are shapeshifters who change from human to wolf form—adopting many intermediary forms if they so choose. They are physically more powerful than most living creatures, and are immune to many of the ailments and diseases that plague their human and wolf cousins, but they’re still living beings and they can still die.

Werewolves heal much faster than normal humans, and as half-spirit beasts designed for battle, they’re exceptionally hard to kill. Most werewolves are theoretically capable of reaching the hundred-year mark or even beyond. It is a rare occurrence, however, that a werewolf has the luxury of dying from old age.

They are pack animals with a complex tribal social structures. Werewolves are expected to embark on quests and missions to help the sept and tribe, guard caerns from attack, lead and look after those lower in station—as their Litany requires.

In the modern nights, the majority of mortals have been convinced by the Veil that werewolves are myths, and thus possess only the knowledge found in the average novel or movie.

Most Vampires regard werewolves (or "Lupines", as they call them) as feral chaotic things that, if not controlled right, can do serious damage to (un)life and limb. Also, most vampires who do know of werewolves note that most werewolves stay out in the countryside. Therefore, interaction between vampires and werewolves tend to be minimal, as vampires stay mostly in the city. Vampires and werewolves are brutal enemies with werewolves regarding vampires as servants of their great enemy, the Wyrm. The Gangrel clan are often said to have forged alliances with werewolves, although this is usually far from the truth; in general, the Gangrel are simply familiar enough with the Lupines to know how to avoid dealing with them entirely. A werewolf (or other werecreature) who has been turned into a vampire is referred to as an abomination, and both werewolves and vampires generally seek to destroy it.

Very few of the Awakened realize that werewolves are real, though their interaction with both the wondrous and monstrous makes them fairly open-minded to the idea of their existence. Regardless, most mages have no more knowledge concerning werewolves than the average mortal gets from modern fiction.

Marauders of the Umbral Underground have traditionally been an exception to the above; as agents of Dynamism, they have made allies with agents of the Wyld, including the Garou and other Fera, though how Marauders interpret such creatures is impossible to determine. Since the Avatar Storm and the loss of their Bygone allies, however, the Underground rarely engages in zooterrorism, and has little contact with the shapeshifters.

The vast majority of Changelings who know of werewolves believe them to be "Prodigals" as they likewise regard other non-fae Awakened beings. In other words, the fae believe "Lupines" to be beings created from mortals dreams like themselves, but whom have forgotten or don't understand this connectivity to the fae and the Dreaming. While the history of werewolf-fae interaction has at times been hostile and at other times been strained, many changelings (particularly of the Seelie Court) have a generally positive view of and bias toward werewolves. The commoner kiths, pooka, satyrs, and trolls generally have the most reverence of nature that serves as a tie to them and the Garou. The Noble sidhe are generally more likely to know more about the Garou, with House Fiona accounting a shared history with the Fianna, House Gwydion having ancient pacts with the Silver Fangs which the Gwydion nobles recall even if the Fangs don't, and House Balor being continually allied to the Black Spiral Dancers. House Scathach may have had the most overall contact with Garou, as it seems they where the Nobles most committed to forging alliances with the rest of the supernatural community and they held a particular affinity for nature. Most nobles know to avoid the Get of Fenris, whom want revenge on the sidhe for an old abuse.

The hunters' view of werewolves differs from creed to creed and even hunter to hunter. Some view them as spawn of Satan, while others view them as animals with a hatred of technology. A few have had the chance to talk to werewolves and have a basic understanding of their mission, though hunters are more concerned with saving humans than the Earth and are not always sympathetic. 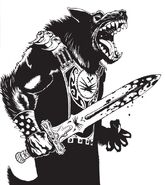