For the computer role-playing game, see Werewolf: The Apocalypse - The Heart of Gaia.

Werewolf: The Apocalypse was a video game that was in development at Capcom's Western development studio around 1995-1996, with plans to release the game on the original Sony PlayStation and the Sega Saturn. Based on the world of White Wolf's roleplaying game Werewolf: The Apocalypse, WTA was a 3D brawler with an overhead isometric-style perspective. Players could choose one of seven characters, including characters from the tabletop game like Mari Cabrah, and do battle with typical Werewolf foes like Fomori, Black Spiral Dancers and Banes. The game was never finished, and only an early and very rough prototype has ever been seen publicly. 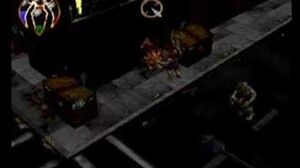 Sega Saturn Werewolf the Apocalypse (Unreleased prototype!)
Add a photo to this gallery

Retrieved from "https://whitewolf.fandom.com/wiki/Werewolf:_The_Apocalypse_(Capcom_game)?oldid=152624"
Community content is available under CC-BY-SA unless otherwise noted.