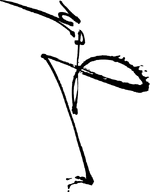 The Way of the Resplendant Crane is the Kuei-jin Dharma of Hun.

The bowman strips you, boils you and straightens you.

Bowman and arrow and target are me.

The rain watches, but does not answer.

The Way of the Resplendent Crane[edit | edit source]

The earth is a chaotic shadowshow of unruly imperfections. Heaven, by contrast, is ordered, secure and settled.

When imperfect souls are returned to earth, Heaven must have some task for them. Some Kuei-jin recognize that they died wreathed in sin; Yomi was not enough penance — they must make bent things straight. Xue recognized this need. Pride had slapped the face of Heaven, and Heaven had responded. The unworthy, he noted, had not been destroyed, but were left to ponder their curse. Perhaps, he reasoned, if they could return to their former glory, Heaven would forgive them and the hunger would be eased. Xue meditated for a thousand nights beneath the Falls of Tong. His arms bloated and his skin turned green, but no enlightenment would come. At last, hunger drove him from the water and he wandered naked in the snow. Nothing could be found and Xue despaired. At the edge of a frozen pond, he saw a white crane pluck a frog from the ice. The bird set the frog aside and the frog became a butterfly. At once, Xue understood.

Like Legalists and Confucianists, Resplendent Cranes see suffering flow from imperfection. If enlightened rulers can set examples — and laws—for their people, those people should prosper. The key lies in the purity of the lawmakers; if the leaders are enlightened, their laws carry Heaven's blessings. The Wan Xian disgraced their posts; their heirs, the flawed souls returning as Kuei-jin, are likewise shameful. To alleviate their shame, the vampires must serve as the Correctors of Heaven, as enforcers and exemplars of the Harmonious Way. The path is not easy — the Demon chews at one's honor and the hunger gnaws at one's resolve. Resisting these distractions, however, provides salvation: salvation for the lost souls of the vampires and for the continuation of the mortal world.

The Sixth Age is not set in stone. It can be averted by virtuous behavior and right action. With a powerful effort, the Great Cycle can be turned back and a new Age of Heaven can begin. The Shining Ice Guardians — as some Resplendent Cranes call themselves — want literally to save the Middle Kingdom from itself. It's a mighty task; never before has the world seemed so corrupt. Still, Chi, the power of Heaven, flows through all Kuei-jin. They have one last chance to redeem themselves, and the Cranes are resolved to do just that.

The Eight Lotus Path (a collection of analects and koans) gives a formula for salvation: The First Lotus offers the recognition of hope. The Second Lotus demands virtuous existence. The Third Lotus involves nurture — rewards for virtue, correction for recklessness — and the Fourth calls for the purgation of the wicked. The Fifth Lotus encourages instruction, while the Sixth demands law. With the Seventh Lotus, mortal law gives way to harmony; the Eighth Lotus transcends the living world and unites it with the spirit. By meditating upon the Eight Lotus Path, a Crane discerns what must be done.

Shining Ice Guardians recognize that the entire world cannot be saved. Things have gone too far out of balance; dead wood will have to be cut away. Most sages set their hopes on the redemption of the Golden Fields — of the Eastern lands and their peoples. The misery in the Orient has been caused by foreign invaders, from the Mongols to the Americans. These invaders carry disease like plague-dogs, and their sickness must be purged. If that requires a blood-cleansing, so be it. Heaven will deal with the dogs in its own way; the Kuei-jin have been sent back to make the Golden Fields pure again.

As a Dharma obsessed with order and structure, many sub-divisions have risen within the Way of the Resplendant Crane over interpretations from the Eight Lotus Path. In the Fifth Age, these groups are generally tolerated, as the low numbers of Kuei-jin make re-educations costly and unpopular.

The deviations from Crane orthodoxy are generally divided into two groups: Those Who Stand Aside, who do not refute any of the fundamental teachings of the Crane's Way; and Those Who Turn The Face, who follow interpretations of the Dharma that reject key principles of the Dharma.

The Way of the Resplendent Crane Training[edit | edit source]

Resplendent Cranes recognize their impurity and strive to overcome it. While they lived, these vampires shamed (or believe they shamed) their families through careless, immoral behavior. In Yomi, their sins were boiled to the surface; now, they wear the residue as punishment for their disgrace.

Still, there is hope. Rigorous discipline, generosity and benevolence are like Hell-money paid for the vampires' souls. A Shining Ice Guardian is counseled to be wise, honorable, prudent and refined. Asceticism is encouraged, but mortification is considered bad form. Masters present their pupils with complex riddles and reward attentiveness with great gifts.

The Way of the Resplendent Crane Weakness[edit | edit source]

Resplendent Cranes have no tolerance for rebellion, and their rage is like the north wind. In theory, they follow the Fivefold Way religiously, punishing anyone who deviates from it. In practice, the Shining Ice Guardians are regal monsters, interpreting the law as they see fit and enforcing it when it suits them. Some Cranes follow Devil-Tigers around like carrion-crows and fall on sinners like icicles plummeting. It is said that Resplendent Cranes are as honest, cold and merciless as the winters they enjoy. In that purity, they hope to find forgiveness, even if they have none to grant themselves.

Important signs to watch for and to keep around. Many followers of this Way integrate these symbols into their homes and temples. Bodhisattavas frequently manifest such phenomena - cold breezes, withering plants, etc. - whenever they appear. The following are Auspicious Omens and Symbols for The Way of the Resplendent Crane: Eight-petaled lotus flowers, crafies, butterflies, cold wind, ice and snow.

Affliations of The Way of the Resplendent Crane[edit | edit source]

The elements connected to the Way. Most followers style their dress, behavoir and practices after the elements they revere, and they employ samples of these materials in their meditations and rites. The Affiliations of The Way of the Resplendent Crane are as follows: Water, the number 1, the color yellow and the north direction.

From Dharma Book: Resplendent Cranes
Add a photo to this gallery

Retrieved from "https://whitewolf.fandom.com/wiki/Way_of_the_Resplendent_Crane?oldid=227228"
Community content is available under CC-BY-SA unless otherwise noted.