watch 03:41
Wiki Targeted (Games)
Do you like this video?
Play Sound

A vozhd is a creation of the Tzimisce, a mishmash of living beings melded together into an elephant-sized, multi-limbed monster. About a dozen lobotomized ghouls are merged through Koldunic sorcery and Vicissitude, resulting in a 15-foot high walking biological weapon.

Many animals, humans, or a combination thereof are forced to consume the blood of their Tzimisce master, enslaving them to the Blood Oath. Then the ghouls are forced to drink each other's blood in a ritual similar to Vaulderie. A congregation of Tzimisce then meld the ghouls into one composite entity.

Such a creature is enormous and, with its multiple limbs and organs, is capable of unleashing a maelstrom of destruction. Excess tissue can be molded to bestow carapaces, spines, claws, tusks, palps, mandibles, fanged maws, or whatever the creators desire. Vozhd are mindless and unsalvageably mad, killing, eating, or trampling anything in their path.

Since the process of becoming a vozhd invariably drives the component beings insane, most Tzimisce lobotomize their victims before the gestalten assembly occurs. A lobotomized vozhd is immune to Animalism, Dominate, and Presence; only rumors exist of sentient vozhd.

The end result of creating a vozhd is the equivalent of a flesh-and-bone tank: huge, slow, unintelligent and devastatingly powerful (levels of Potence, Fortitude, and Blood Pool generally equal to twice those of the highest level among the component ghouls).

The creation process irrevocably bonds the vozhd to a single creator; this Tzimisce alone can "command" the vozhd, though the war beast rarely comprehends commands of more than two or three words.

Role of the Vozhd

Vozhd are war ghouls. They are usually starved before a battle, so they may be pointed in the general direction of the opposing forces. Vozhd are nearly as dangerous to their creators as they are to their enemies, thus typically deployed into the enemy's soldiers. The very size and ferocity of the monster often work to the detriment of the Sabbat; few things can better convince Camarilla elders, Anarchs, Inconnu, and neutral clans to unite against a common foe, than a fifteen foot wall of destruction.

On the other hand, few things can convince Camarilla elders, Anarchs, Inconnu, and neutral clans to surrender to the Sabbat so quickly as seeing their city's Prince torn to pieces and greedily devoured by a rampaging vozhd. Therefore, they rarely see use in any but the most frenzied conflicts in modern nights, as a vozhd wreaking havoc in a major city would attract the kind of attention that even the Sabbat doesn't want. Their implementation in combat has only been historically recorded by the Kindred, and even then only a handful of accounts exist beyond rumor.

Few vampires make vozhd anymore, just as few vampires build castles anymore. The titanic war ghouls come from an age when the Tzimisce strode the Carpathian landscape as absolute masters, free from fear of mortal hunters or even vampiric rivals. In the age of organized vampire hunters, satellite imagery, and portable anti-tank weaponry, war ghouls create more problems than they solve. Since vampires seldom completely abandon any practice once they take it up, a handful of creators do continue to make vozhd in the Final Nights, but almost all vozhd are team projects, for it takes time and effort to reassemble components into the final form – and teamwork reduces the risk of components going bad, suffering accidental damage, or otherwise wasting the creator’s work.

Still, it rarely pays-off. This creature was staple in the Dark Ages, where its size, resilience, and capacity for violence proved devastating. Though rendered obsolete in modern nights due to the emergence of modern weaponry, it is still used on occasion for the purpose of scare tactics. 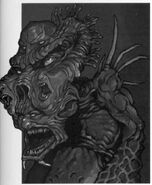 From Guide to the Sabbat. Art by Bill Sienkiewicz

Retrieved from "https://whitewolf.fandom.com/wiki/Vozhd?oldid=272884"
Community content is available under CC-BY-SA unless otherwise noted.