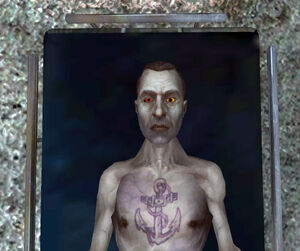 Virgil Crumb is a character appearing in the video game VTM: Vampire: The Masquerade: Bloodlines .

The player character is sent on a quest by Knox to find a Cathayan that has been stalking him. He is given a driver's license which leads to Virgil Crumb's corpse. A key to Foxy Boxes is found in the personal belongings of the corpse. Arthur Kilpatrick's computer states that Virgil died of heart failure, it is strongly implied that the Cathayan killed him.

His left and right eye vary in color, not common to human normalities (left eye: the sclera is yellow, right eye: the sclera is blood red), and both arms appear flat and sunken in, for unknown reasons. An anchor tattoo is clearly visible on the sternum area of his chest.

The player character may find his belongings in a locked chest to the far corner of the morgue. Along with a security card to gain access to Foxy Boxes, there is an inexpensive engagement ring (hinting at the possibility of Virgil planning to propose to a special person, before his untimely death).

Virgil Crumb's driver's license
Add a photo to this gallery

Retrieved from "https://whitewolf.fandom.com/wiki/Virgil_Crumb?oldid=265675"
Community content is available under CC-BY-SA unless otherwise noted.