General of the Army of the Night

Viktor was a 6th generation Gangrel, and one of the generals of Baba Yaga, head of the Army of the Night, the vampires that served the Hag in her attempt to reclaim control over Russia. Viktor was a tall, dark man in perfect shape. His glare was intense and commanding.

When the legendary Nosferatu Baba Yaga awoke from torpor, she declared war on the rest of the world and summoned back her immortal minions to her side. Viktor is the leader of Baba Yaga's Army of the Night. The Army is composed of 25 vampires, including Viktor.

Viktor had been blood bonded to Baba Yaga for a thousand years before she entered torpor and his loyalty earned him a special place in her eyes. He is powerful, and the years have taught him much about combat and survival. He has mastered both. Although he is old and tired, he serves the Hag with a zeal reserved for fanatics. Rumor has it he ripped apart his own childe for not showing proper respect to the Hag.

The only thing that rivals his love for Baba Yaga is his respect for the Garou. In another life he could have befriended them. He sometimes shows leniency to the Garou in battle, something Baba Yaga does not know and would be very displeased with if she found out.

But Viktor's respect for the Garou would be his undoing. While on a mission in St. Petersburg, the White Nights began – an annual event each June when the Sun shines day and night in Northern Russia for three weeks straight. To avoid the Sun, Viktor ordered his men to Earth Meld into the land. There was a worry that the Garou would discover them sleeping and take advantage of the situation. But Viktor believed the Garou were too honorable to attack a sleeping foe. He was wrong.

About a dozen local Lupines sensed the enemy in the land and they unearthed and destroyed Viktor and most of the Hag's army. When Viktor awoke he flew into a wild frenzy, killing three Garou before the rest took him down. As they tore his head from his body he screamed obscenities at them and cursed them, "You have no nobility to attack a sleeping foe!" Even after his body crumbled to dust his disembodied head could be heard muttering "Forgive me Little Mother. I could not find it." The event was thereafter known as the White Nights Massacre.

Viktor, General of the Army of the Night 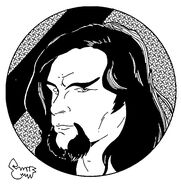 From Rage Across Russia
Add a photo to this gallery

Retrieved from "https://whitewolf.fandom.com/wiki/Viktor?oldid=229746"
Community content is available under CC-BY-SA unless otherwise noted.