For the publishing division of Pentex, see Vesuvius Incorporated. 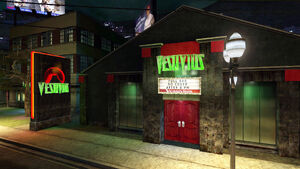 The Vesuvius is a nightclub in Hollywood, owned by Toreador Velvet Velour.

The club is inspired by Mount Vesuvius, with the club's interior patterned after lava pools, stalactites and stalagmites, and even the lamps designed to look like erupting volcanoes. The main floor is divided into the main dancing area and a bar, with some raised "private" rooms to one side. Like VIP areas at a club, however, the private rooms are still perfectly visible to other patrons.

The VIP area is 14 steps up to a second floor, and features a couch, a single pole, and a hot tub. Velvet often takes Kindred up to this area if she wishes to have private conversations with them.

It was one of the places that the Society of Leopold had under surveillance for vampire activity, suspecting (correctly) that Vesuvius is a Kindred establishment.

During the events surrounding the Ankaran Sarcophagus in late 2004, the strippers included Velvet herself, Bambi, Misti, Cindi, Nikki, and Candi. Chastity had recently been exposed as a hunter, and had been fired. Adult film star Sapphy Amore had also been a former stripper, and is still known to drop in from time to time.

Retrieved from "https://whitewolf.fandom.com/wiki/Vesuvius?oldid=263616"
Community content is available under CC-BY-SA unless otherwise noted.