Vasilisa is a fourth generation Cainite, one of the Nictuku progeny of Absimiliard. It was sent by his sire to destroy its rebellious childe, Baba Yaga. The Nictuku can appear as anything it chooses, but when it bothers to appear at all, it almost always chooses an innocent seeming form.

A young child was slated for execution by his village for killing his family and several other villagers with tools, poisons, and even by leading them into the jaws of lurking predators (reports vary on the child's gender, but most rumors assume it was male). Absimiliard was impressed by the boy's ruthlessness and found him patiently awaiting death crouching in the corner of the room, watching a spider eat his prey. The Nosferatu Antediluvian offered the child a chance to become the spider, and Embraced him after his positive reply. Almost immediately, the boy burst from his cell and fed on the entire village. He did not kill them all; some he saved, like a spider. Absimiliard was very proud of the boy.

The Nictuku was not very human even in the distant past when he was human. Anything resembling human thought process is now gone. He – it – has become the predator, and is now more a presence than a sentient being. It can take the shape of a human in order to accomplish its goals, or its master's goals.

It finds amusement in taking on recognizable, almost archetypal forms to hunt its prey. Vasilisa, Koshchei the Deathless, Baba Yaga, Anastasia – Russians respond strangely to these names. It does not have a name that it remembers; the other Nictuku and Absimiliard are the only beings it allows to truly communicate with it, and they do not need to speak to do so.

The Nictuku is unknowable. Baba Yaga may have left her humanity behind centuries ago, but "Vasilisa" did not have much to begin with, and it is over twice her age. It has transcended "disciplines" and does what it wishes to do.

Tasked by its sire to destroy his rebellious childe, the Nictuku followed a coterie of Cainites into the lair of the witch, where the ancient Nosferatu battled and Baba Yaga was finally destroyed. "Vasilisa" disappeared from sight, her current location as mysterious as her past.

Indeterminate, occasionally appears as a child 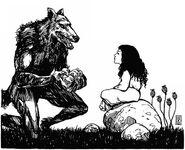 The Nictuku entertains an offer from the Garou. Art by Vince Locke

Retrieved from "https://whitewolf.fandom.com/wiki/Vasilisa?oldid=209511"
Community content is available under CC-BY-SA unless otherwise noted.