Vasantasena is a sixth-generation Malkavian elder who became one of the first Malkavian antitribu among the Sabbat after she had foreseen the return of the Antediluvians.

Born near the end of the 10th century, Vasantasena was the daughter of the Tamil emperor Rajaraja the Great. She was struck by a wasting disease, one that seemed incurable until her father's court was visited by the wandering fakir Unmada. Unmada, who was actually a Malkavian methuselah, recognized that she was being drained by another vampire – in this case, the emperor's treacherous chamberlain from Calicut, who was himself a Tzimisce. Unmada gave the emperor a mystical wooden wand that could kill the creature, but his advice was rejected.

Vasantasena herself took a guard's sword and dealt the chamberlain what would be a fatal blow to any mortal. The chamberlain simply struck her down, shocking the court. Enraged, the emperor took up Unmada's wand and drove it through the chamberlain's heart. Although Vasantasena appeared to have been killed by the Tzimisce's unnaturally forceful blow, Unmada had actually given her a potion of his own vitae, granting her the strength of a ghoul – enough strength to survive the creature's attack. While her father mourned her, Unmada secretly Embraced her and took her away from her father's court, though not before he committed diablerie on the defeated chamberlain.

Unmada and Vasantasena wandered throughout Asia. The pair preached the dangers in which the blood bond made Cainites vulnerable to the machinations of their elders, sought to reduce the strife between Cainites and mortals, and gave oracular warnings intended to avert Gehenna. By the 13th century, they had begun traveling through Europe, giving spontaneous counsel to the most prominent Cainites, particularly the Lasombra. Despite this, as they crossed the Italian peninsula in 1230, they specifically avoided visiting the castle of the Lasombra Antediluvian himself. Later, both Unmada and Vasantasena supported a peaceful resolution to the Anarch Revolt.

The pair attended the Convention of Thorns, where Unmada relayed a vision of fiery genocide if the clans were unable to unite. However, when the Convention dictated harsh terms of surrender to the Anarchs, the pair were forced to part ways over irreconcilable differences in ideology. Where Unmada saw the primacy of ending the ongoing bloody struggle, Vasantasena saw the primacy of ending the ongoing practice of the blood bond. On the night the Assamites were subjected to the Tremere blood curse, Vasantasena abandoned both the Camarilla and her sire. She took many secrets and many captive anarchs with her when she went to the fledgling Sabbat, and became one of the first of her clan's antitribu.

Vasantasena has remained a voice of both reason and madness within the Sabbat ever since. Her mastery of Auspex is said to be so great that she is aware of everything that occurs within the sect. A staunch defender of the necessity of recognizing vampires' own Humanity, she is a longtime critic of the Paths of Enlightenment. Despite the fact that she has debated many a Path adherent to the point of humiliation – or perhaps because of it – she is highly renowned by her fellow Sabbat, especially her clanmates.

Vasantasena believes that the only hope for the race of Cainites to survive Gehenna is by unifying against the machinations of the Antediluvians. She sees the Camarilla as nothing but a tool of the Antediluvians that can only work against this shared cause. Thus does Vasantasena retain the spirit with which the Sabbat was founded, even as many of her peers fall back to the petty political strife that comes so easily to the descendants of Caine.

Vasantasena and her Malkavian sire Unmada traveled the world throughout the Middle Ages, preaching against the Blood Bond. They rejected the vinculum, traditional Kindred hierarchy, and all loss of free will. Ultimately, they condemned the Antediluvians for their cruel tyranny through Jyhad, joining the Sabbat during its formation. As the Camarilla had, the Sabbat rejected her cause, instituting both hierarchy and ritual enslavement through vitae. She eventually rejected them in turn, assembling a faction of Malkavians to embrace freedom from the Sabbat. Vasantasena’s descendants are many and varied, and all of them followed her from the Sabbat before the sect’s recent, bestial devolution. Some joined the Camarilla, others the Anarchs. All possess the zeal and charm she wields like a knife. All fight for something. 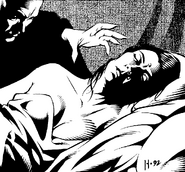 Vasantasena before her Embrace in Children of the Inquisition

From Children of the Inquisition

From Children of the Inquisition 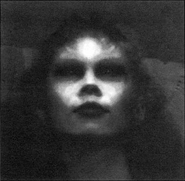 Vasantasena VTES card. Art by Alan Rabinowitz
Add a photo to this gallery

Retrieved from "https://whitewolf.fandom.com/wiki/Vasantasena?oldid=239661"
Community content is available under CC-BY-SA unless otherwise noted.