Vandal Cleaver is Therese Voerman's ghoul who works at the blood bank in Santa Monica.  Despite being Voerman's ghoul, Cleaver hates his regnant, going so far as to nickname her the "Queen Bitch". His hatred of her is not just directed towards her position as his master, but also her vampiric nature. Cleaver appears to hate vampires, stating that he only became a ghoul because he fell for the charms of a vampire, presumably Therese. He also states that "he doesn't do dead chicks". He is also heavily afflicted by the Malkavian blood of his domitor, showing signs of madness similar to that which affects the Malkavian protagonist.

Cleaver has a very unpleasant personality, being extremely misanthropic and hating almost every person in his life. He sees blood as wine, being interested by its bouquet, calling it "Nectar of the Gods". He is also extremely sadistic, having a violent upbringing. He stated that when he was a child, he loved to kill rats with traps and then watch as their blood coagulated near the cheese. 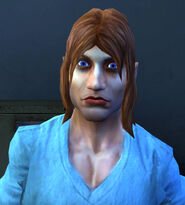 Add a photo to this gallery
Retrieved from "https://whitewolf.fandom.com/wiki/Vandal_Cleaver?oldid=243012"
Community content is available under CC-BY-SA unless otherwise noted.