Valerius, born Walhhere, was a 7th generation Ventrue and former seneschal of Mithras, the Cainite Prince of London.

In life there was no Valerius, only Walhhere, a minor Saxon noble, loyal to King Harold and happily married with three strong sons. His people prospered and he ruled his lands well. Then came King Harold's call. The Normans had invaded the country and each lord was expected to raise men in the country's defense. Walhhere answered the call without question, marching to battle with a cool, calm, confident frame of mind. Valerius entered unlife on the battlefield of Hastings, shortly after being run through by a Norman blade. He took his new name to reflect his new existence. After a few decades spent with his sire Bindusara, a noted scholar, he pledged his sword to Mithras.

For several centuries he served as Sheriff, keeping London free of undesirables for his Lord. When Mithras' chamberlain, Lord Camden, was slain in mysterious circumstances, Valerius replaced him. Respect for him grew to such a point that when Mithras disappeared in 1798, no one questioned Valerius' right to claim the domain in his stead. After the Sabbat attack in 1848, the would-be prince's mood changed. First of all, he decided that the city needed to be better defended, and that meant welcoming Tremere into the city to help bolster its defenses. He finally cast aside his mentor's prejudices against the Witches and gave the clan full rights and positions in the city. He granted Embracing rights generously and invited vampires from other cities to help replace those Kindred destroyed during the incursion. He also decided that waiting for Mithras to return after half a century was a waste of time, and that he should seize the position of prince for himself.

Valerius' efforts to open up the city to other vampires and win Camarilla approval for formally adopting the title prince has been his undoing. The previously unquestioned Ventrue grasp on power then looked less assured, as the Gangrel took a greater interest in London, often sending powerful childer to represent their interests in the growing city. The Tremere quickly leveraged their open invitation into a substantial power base in the city. Few of London's elder Kindred were prepared to support Valerius' open revolt against Mithras' policies; and certainly the princes of other cities showed no signs of approving his adoption of the title, concerned as they were by the likely repercussions should Mithras return.

When Mithras did return, Valerius immediately summoned the primogen, to give himself enough time to work out what to do next. The moment the Tremere Primogen walked into Elysium, Mithras exploded in rage, publicly stripped his former seneschal of all rank and privilege, and physically threw him out of the building. Since then, Valerius broods and plans in a new haven hidden in the East End. His former mentor has taken no further action against him, but has set about destroying the power structure Valerius so carefully built. Valerius' own childe, Anne, has turned against him, throwing her lot in with Mithras rather than the Kindred who Embraced and mentored her. Valerius is well aware that he has been rejected by his mentor and betrayed by his childe.

In 1888 he tried to kill Mithras with a help of Tremere Anton Wellig, by using Emma Blake as a vessel for poisoned blood, but Kemintiri interrupted the ritual.

Valerius is wiry, athletic man in the early 30s, who has long red hair and neatly-cropped beard. 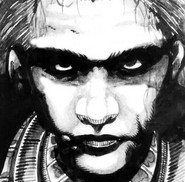 Retrieved from "https://whitewolf.fandom.com/wiki/Valerius?oldid=229899"
Community content is available under CC-BY-SA unless otherwise noted.