View source
watch 02:59
Metroid Dread - The Loop
Do you like this video?
Play Sound

Salubri
Valeren is the mystical Discipline of the Salubri. At its most basic, Valeren provides control over pain and increased martial ability, seemingly allowing warriors to draw on the power of heaven to vanquish their foes.

Like Obeah, the use of Valeren relies upon a third eye which is formed when a vampire gains a second level in either Discipline. The third eye is said to bestow "sight beyond sight" and enable the Salubri to see the threads of life and death around them. Use of any power but the first causes the third eye to open and glow brightly, making surreptitious use very difficult.

In Vampire: The Masquerade, the Healer and Warrior Paths are completely separate Disciplines, Obeah and Valeren, and there are no special rules for learning both beyond having an available teacher.

In Vampire: The Masquerade 5th Edition, Valeren is no longer a distinct discipline, but an Amalgam Power of Fortitude 2 and Auspex 1. 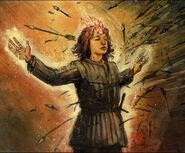 Sword of the Righteous. Art by Andrew Trabbold
8 Dots