Véronique d'Orléans is a 9th generation Brujah, and the signature character of her clan in Dark Ages: Vampire.

Véronique was born as the only daughter amidst six brothers to an apothecary and a midwife in Orléans. She became a bit of a tomboy and managed to learn the trades of both of her parents, although she was legally permitted to practice midwifery only during her mortal days. Not being content with the restrictions placed upon her because of her gender, she found it difficult to find a husband that would allow her to continue her work. It is said that she attracted the admiration of her sire when she cared for one of Portia's mortal servants, and that she earned the Embrace through her cool-headed responses to every challenge Portia could contrive.

Early on in her unlife, she was confronted with powerful figures of Cainite politics, like Alexander or Esclarmonde. Because pinning down her exact loyalties proved to be difficult, she found herself in a very strong position and became an influential player in the politics of the night. This makes her an unusual Brujah indeed; she spends less time pursuing ideals and more time traveling about on errands for a wide variety of Cainites from various clans. The situation has led to a growing reputation that Véronique and her services are available to the highest bidder, although this has never been verified. Her haven and herd resided in Paris in the Latin Quarter, where she regularly returned.

She found friendship with Jean-Batiste de Montrond, the "Serpent of Paris", who shares the Latin Quarter with her. 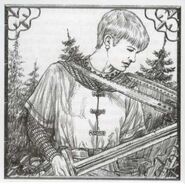 Retrieved from "https://whitewolf.fandom.com/wiki/V%C3%A9ronique_d%27Orl%C3%A9ans?oldid=234547"
Community content is available under CC-BY-SA unless otherwise noted.