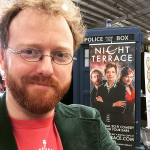 Guybrush (who drew his nickname from The Secret of Monkey Island) is Ben McKenzie. A long-time official White Wolf forum lurker, Ben is a fan of pretty much every game to come out under the White Wolf Game Studio imprint, and a fair few Arthaus ones as well. He loves them all, though his current passion is the new WoD - especially Changeling: The Lost.

Ben is too lazy to write a full biography here and instead directs you to his Wikipedia biog.

Some useful pages and web sites:

These are some of the general areas I'd like to improve, though I also enjoy generally tidying up and copyediting articles. I'm more of an editor than a writer, though I'm not too shabby in the latter department either.

I put this stuff here for my reference, but also to give others ideas of what needs doing. If you'd like to help with any of the below, I'm not precious - get into it, you don't need my permission! And I'm happy to help if you want to collaborate, though my wiki time is pretty slim these days.

I'm currently adding in articles for all the general mechanical terms like success, dice pool, Skill etc. I'm trying to tread a careful line between giving enough description that a newcomer can get an idea of how it all works, but not enough detail that we're providing rules for free. Hopefully I'm doing okay so far, but please pull me up if I botch.

Second main project at the moment: adding articles for Changeling: The Lost to the same quantity and quality as the Promethean articles. I still want to flesh out the Changeling: The Dreaming stuff too; there's a lot which isn't yet covered in proper detail, including the Kiths and many books.

On the back burner: I fleshed out most of the blood sorcery articles, and others (thanks!) have done some great work with Koldunic Sorcery and Nahuallotl, but those two and Wanga still need work. I also want to tidy up my references and add path lists in the format I established with Thaumaturgy and Setite Sorcery; I'm not sure I like the extra level of detail that's been added to some of the main pages, though.

On the further back burner: Need articles for each tribe (including Bale Hounds and expansion of Ghost Wolves) and auspice, plus Father Wolf, Luna and individual articles for the Forsaken and Pure Tribes. I'd also like to clean up the articles on the Hosts and Lodges (the latter an expansion, including addition of cross-tribal Lodges).

This is stuff I've noticed when I either don't have time or reference material available, put here so I don't forget.

Retrieved from "https://whitewolf.fandom.com/wiki/User:Guybrush?oldid=57200"
Community content is available under CC-BY-SA unless otherwise noted.