Uktena
The Uktena are one of the tribes found in Werewolf: The Apocalypse. Composed of the broadest base of cultures and considered one of the more "primitive" groups of Garou, the Uktena are also masters of the dark and forbidden knowledge.

The Uktena were one of the original tribes, or Pure Ones, who were the first to settle North America. Of the Pure Ones, they were known as "Older Brother". Legends tell that the early Uktena had traveled before to the Pure Lands after they were called by Gaia, and later returned to bring their brother-tribes, the Croatan and Wendigo, with them to defend the land.

Early in the history of the tribe, they had another Totem, Skyhawk. At some unspecified point during the settlement of the Pure Lands, their Totem vanished and "Older Brother" won the allegiance of Uktena instead, after whom they renamed theselves. The Uktena traveled farthest south, eventually settling in territories in southern North America, Central America, and parts of northern South America. Conflicts between the native Fera and the werewolves, and the lack of South American wolves hindered the Uktena to settle farther south. The Uktena used their mystical knowledge to bind numerous creatures of the Beast-of-War that roamed the lands and put them to sleep beneath special Caerns, eliminating threats that the Garou could not destroy outright.

The Uktena took numerous mortal nations under their wing, teaching them about Gaia and the spirits. Some of their people, however, turned that knowledge against their teachers, using their new-found power to rule over their nations and sometimes even turning against their Garou benefactors. Others fell prey to the temptations of the Wyrm. The Uktena tried to warn their Brothers tribe that the Wyrm continued to manifest not only as monsters, but the Wendigo refused to listen. The Croatan overreacted to the betrayal of their mortal peoples with brutal vengeance, destroying the entire Adena culture in retaliation for a small number falling to the Wyrm's deceptions. So, the Uktena distrusted the other tribes's judgment and took it upon themselves to police the Pure Lands of growing Wyrm-Taint, only calling upon their Brothers when the danger became too grave.

The Uktena were driven from many of their Central American holdings during the time of the Aztec Empire. The Aztec worshipped a coven of Wyrm entities headed by Huitzilopochtli, who demanded blood sacrifices from the population.

The Uktena continued to fight the Wyrm creatures that were spawned by such hellholes, categorizing numerous new monstrosities like Heart Eaters.

When the Wyrmbringers arrived, the Uktena foresaw it. Due to misunderstandings and racism, battle erupted between the European Garou and the Pure Tribes. Since the European Garou did not bind Banes, they believed the holy sites of the Uktena tainted and the Tribe corrupted by the Wyrm. In these battles, numerous Banes were unintentionally freed and eventually, the wrath of the Eurasian Garou turned against the other Native American Fera, whom they saw as complicit. It took the genocide of the bat-shifters to persuade the Shadow Lords to end their part in the bloodshed, but the damage was already done. The suffering and spiritual chaos, as well as the massacre of a loyal Changing Breed out of blind paranoia and prejudice, had strengthened an aspect of the Triatic Wyrm, the Eater-of-Souls, who nearly manifested in the material world. The Croatan took it upon themselves to drive it back, using lore from the Uktena to devise a ritual to banish it. This ritual required the sacrifice of the entirety of their Tribe.

The death of Middle Brother shook the Uktena and the fragile unity between the remaining Pure Tribes. The Wendigo accused the Uktena of having left the Croatan to their demise and of dishonoring their memory by taking their Caerns, while the Uktena saw themselves responsible for the Croatan's decision and sought to preserve their Caerns from the Wyrmbringers. Falling into reclusiveness and searching for the secrets of their lost Brother to preserve them, the Uktena became increasingly obsessed with secrets and turned their attention from their human nations and Kinfolk. It was only when the Storm Eater manifested that they again joined the other Tribes and even convinced the Wendigo to participate in the rite to binding the entity.

The nations that the Uktena had once called Kin were in ruins, the tribe themselves scattered and removed into reservations, their children losing their heritage. Seeing few other choices, the Uktena chose to interbred with people from outside the Native American demographic after the Great Council of 1819. They chose to interbreed with and protect similarly oppressed people: First African slaves, then people of Polynesian descent and even from far away places like New Zealand and Hokkaido. Only European cultures were not to be welcomed. The Wendigo saw this as a betrayal of their heritage and shunned these new Uktena.

The Uktena have found themselves vindicated. Interest and pride in the cultures of their Kinfolk, that once were so severely persecuted, has arisen among the people. The Uktena begin to involve themselves more closely with their Kinfolk's problems, working to make ensure that they are aware of the threats of Weaver and the Wyrm these days. Some fight back by using these connections, establishing National parks for their wolf Kin and fighting for civil rights and land rights for their human relations.

Voices within the Tribe call for a closer cooperation with the European Tribes, since the Garou Nation divided cannot triumph against the Wyrm, who seems to grow more powerful every night as the Red Star blazes in the sky. In 2002, another Great Council was called to discuss these omens and prepare for the Apocalypse.

The Uktena have a loose organization. Moots are held between different Septs in order to avoid becoming isolated, while tribal Councils are held to discuss matters that affect the Tribe as a whole. During Councils, only Garou of the rank of Elder will speak, although any Uktena can attend. Every season, a Great Council is held that gathers the Elders of the entire Tribe to discuss the state of things in the world and how they could affect the Tribe.

Uktena camps tend to be groups of like-minded tribe-members who bind themselves together in search of certain secrets. Each camp has a particular focus and seeks a specific kind of knowledge. Some wish to explore only the secrets of the material world; others look to the spirit lands or even places that should remain hidden.

One last Camp is reviled within the Tribe and seen as Wyrm-Tainted:

The Uktena have a reputation for taking in refugees, particularly those who have had their homes and lands conquered and taken from them. While the majority of pure-bred members are Native American, there a fair number of Uktena who come from a mix of races and cultures that have had their numbers decimated and their old ways were in danger of being lost forever.

While gifted in many spiritual practices, including the art of prophecy and visions, the Uktena are best known as hunters of the Wyrm and its Bane servants. While there is little argument that the Uktena are second to none when it comes to their abilities, it comes at a price. The Uktena have access to many ancient dark practices because of their broad culture, and while some have proven beneficial to the tribe, many others are probably best left undisturbed. While many seek the skills of the Uktena as hunters of the Wyrm, others distrust their dark abilities and fear the tribe may corrupt itself, or that it already has.

Ever since the Europeans invasion of North America and the sacrifice of the Croatan, the Uktena remain markedly bitter towards the European tribes of Garou. Their closest ally is the Wendigo tribe, but even "Younger Brother" has begun to wonder how far the Uktena will carry their dark practices.

In addition to the Litany, the Uktena observe an additional tenet: "Seek Knowledge Wherever You May". Most of this knowledge is directed at the Wyrm and the location of hidden Wyrm-Beasts so that the Uktena may stand watch over them. To this end, the Tribe is willing to cooperate with other supernaturals. Their occasional contacts include other Fera, Dreamspeakers, Nunnehi, and even a rare Tremere that believes he can outwit the Lupine. At times Uktena have even pretended to listen to overtures from Wyrmspawn such as Black Spiral Dancers, but only to steal their secrets before killing them.

Uktena are essentially required to engage in occult and spiritual practices. While many direct these abilities against the Wyrm, others may find their talents in prophecy or in discovering lost lores.

The Uktena revere the Triat as the Three Grandfathers: Grandfather Smoke, the Wyld; Grandfather Spider, the Weaver; and Grandfather Serpent, the Wyrm. The exact stories about the disharmony between them vary from Caern to Caern, often reflecting tribal stories of their human kin in the area. Unlike some of the other Tribes, the Uktena recognize that the Wyrm is not evil in itself. Great Uktena was once a servant of the Wyrm of Balance and the Uktena seek a way to defeat the Serpent through cunning, not mere brute force. 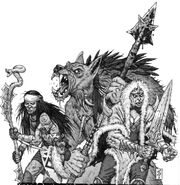 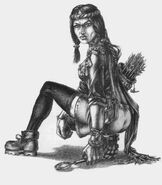 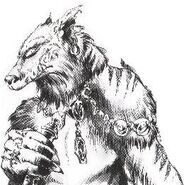