The Tzimisce Antediluvian, commonly referred to as the Eldest by its descendants, is the most inscrutable of all the Antediluvians, consumed as it is with questions of Metamorphosis and the arcane requirements to advance on this Path. Whatever parts of it that were human, if it were ever human, are long abandoned.

The Tzimisce lay claim to being descendants of Enoch, as they say that the Tzimisce Antediluvian was a childe of Ynosh,[1] even though this claim conflicts with the Book of Nod's Legend of Irad.

There are two conflicting tales about the origin of the Tzimisce Antediluvian.

The Legend of Irad has it that, at some point in the city of Enoch, Irad the Strong sought to purge himself of all evil. Using his mastery of Protean, the ancient gathered all of his evil into a bilious mass of repugnancy and horror, and spat it out. Irad's intention was to destroy the mortal who consumed this mass of Protean, thinking that by destroying this mortal, he would destroy the evil also. But to Irad's surprise, this mortal appeared normal. Irad brought the mortal to his brother Enoch's attention. Curious, Enoch Embraced the mortal to see what the outcome would be. Thus, the world was given the Tzimisce Antediluvian.

According to texts in the Library of the Forgotten, Ynosh the Lawgiver was attracted to the insights of the man that he would Embrace. Ynosh willed all that made him more than mortal into the vitae that he used to Embrace him. Through this, [Tzimisce] was purer than his brethren. Some scholars draw on the Legend of Irad and believe that Ynosh concentrated his Beast into the vitae used for the Embrace, while others believe that Ynosh chose [Tzimisce] for the reason that he believed that the oracle could master the most cruel parts of vampirism.[2]

The Eldest counted itself among the first Antediluvians, though it remained apart from them. In its eyes, the other Cainites stagnated in development. They possessed no potential to grow or become greater than when their sires Embraced them. The Eldest, on the other hand, an oracle in its mortal days, expressed the gamut of evolution's whims with wondrous flourish. Distraught over its tethered existence, the Eldest spent a mortal's age in seclusion and meditation, shifting and flying through shapes of mortal and legend alike, seeking out a form free of the accursed thirst. When all failed, it left the First City and wandered into the East, siring childer in the process to expand its own perceptions and study the limitlessness of form. The Eldest wished to delimit itself according to its destiny, as opposed to what it might be now, and mortals were key to that expression.

The Old Clan tell that [Tzimisce] walked the world before the Deluge and found a city where mortals worshipped infernal entities. Enticed by the concept, but finding the rituals of the tribe wanting, it "educated" them and was enlightened in turn. This tale has much in common with what is believed about the Baali.[3]

Eventually, the Eldest reached what would later be named Transylvania. There, it met a slumbering entity called Kupala, which had been sealed by the Lupines and yearned for freedom. Despite great resistance, [Tzimisce] managed to free Kupala, but could not sever the ties between it and the Carpathian land. [Tzimisce] lived in its new domain during the Deluge, offering escaping mortals the mountain peaks as shelter in exchange for blood. When it was cursed by Caine, the Eldest was hit by surprise as it was far from its home, and suffered as long as it was disconnected from the ancient land claimed by Kupala.

The accounts of the Salubri tell that Samiel, childe of Saulot, challenged [Tzimisce] in its lair during one of the Baali Wars, sensing the taint upon it. The Eldest was slain by righteous fire, but managed to take its assailant with it. After the struggle, the Bogatyri (the Antediluvian's personal guardians) vanished into the night, never to be seen again.

It then used the part of its own essence invested into its childer and reformed itself in the bowels of the Dracon. The childlike body of the Eldest was brought to the Cathedral of Flesh and tended by Yorak, while it listened to Kupala's whispers and learned more secrets from it. Although Yorak sent word to the Bogatyri about the Eldest's return, they never came back, and the master of the Cathedral of Flesh assumed the mantle of clan leader while his sire slept.

Around 1232, one of the manifestations of the Eldest was discovered by a young koldun named Ilias cel Frumos, in the haven of teraboste Damek Ruthven. Inside the fortress, Ilias stumbled upon a long colonnade of stone and wooden columns that led down from a threshold, widening into an enormous circle at its far end. Standing in the middle of that circle was a tree – a massive, wide-spreading tree, a true grandfather of the forest, still in leaf despite the winter, the wind hissing softly through its branches with a sound like distant whispers. Ilias almost thought he heard a voice in it.

He instinctively knew a god dwelt there, or a being close enough to divinity that the differences hardly mattered. Ilias experienced the sensation of walking down to the tree distantly, nearly outside of himself. He knelt among the roots of the tree, the ground filled with fallen leaves that smelled like dried blood. The bark was warm to the touch and felt like skin.

Ilias laid himself against its bole and the god welled up within it—welled up within him— like sap rising with the spring. He felt it touching him from within, moving in his blood and soul, running its fingers through his thoughts. Then, it spoke, softly, urgently, the same voice he had heard in his dreams. The same voice, and the same unfathomable tongue, the same sense of insistence, of an urgency so strong it was nearly fear. He begged it, silently, to make what it needed of him clearer. But it did not seem to know how. When the god-tree released him, Ilias was left with a small crimson seed, which he kept closely.

He ultimately ate the seed when his coterie was confronted with the methuselah Dracon. After making use of the seed, Ilias was possessed by the Tzimisce Antediluvian in a Obertus Monastery in the outskirts of the city of Brasov. His body was used to destroy Markus Musa Giovanni and to impart the young Tzimisce Myca Vykos with the dragon-seed of his ancestor. Ilias' body could not withstand the force of the being that had spoken and acted through him and dissolved itself into fine ash.

At the turn of the 15th century, an Anarch leader, Lugoj the "Blood-Breaker", used Lambach Ruthven to locate the Tzimisce Antediluvian. After the crushing of the Lasombra Antediluvian, it seemed nothing could stop the Anarchs. With Lugoj strengthened by Byelobog's diablerie, he led the resistance straight to the ancient Sernog Monastery where it was thought that the Tzimisce Antediluvian was in torpor. A great battle ensued between the Tzimisce Guardians and Lugoj's mob.

However, [Tzimisce] was not in torpor and somewhere in the midst of battle, it secretly subdued Lugoj. Through the power of obfuscation, the Tzimisce Antediluvian impaled Lugoj on a massive wooden hook, paralyzing him. [Tzimisce] then fleshcrafted into what looked like Lugoj, impersonating him.

[Tzimisce], impersonating Lugoj, then rallied the Anarchs, leading them to think they had won the battle. Then it took the farce one step further by dispelling the magical protections of torpor and unearthing a fleshcrafted decoy that resembled the Tzimisce Antediluvian, and consumed the decoy's blood, making it appear as if Lugoj was diablerising the Antediluvian. Lambach was the only participant to discover the "real" Lugoj impaled, and to realize that the Lugoj standing before him was the Antediluvian himself. Lambach remained silent, in terror of his progenitor, who locked gazes with him, knowing that Lambach had observed the truth.

The Eldest, masquerading as Lugoj, let his body be transported to a hidden crypt beneath what would become New York City by Zantosa Revenants that knew of his ruse. There, it entered a meditative state to reach Metamorphosis. In the process, its body dissolved to a puddle of slime, then transformed into fungi, then into plants and every other living creature in existence, exploring the infinitude of life by assuming its shape.

The Eldest fed on its own creations, Zantosa Revenants, and clueless Nosferatu, as it expanded in size and complexity. It produced its own vitae, finding sustenance in the very essence of the Earth, slowly approaching the final transformation. Lambach, led by the Revenants, found the evolving mass and was given an offer to join it. As Lambach declined, the Eldest sent out its call, drawing members of the Clan to New York and into the sewers, reclaiming its essence within them. It started to infuse itself into other creatures, beginning with plants and animals, to master them and unite all Creation into itself.

The Eldest appears to have had more trouble than it should in its quest, lost in itself looking for an answer it could not find, riven by the loss of its true bonds to the Earth. Eventually, sometime in the early 21st century, it found its way back to itself, then left New York to seek its siblings' counsel.[5]

These are stats of [Tzimisce] in the Gehenna "Crucible of God" scenario where he possesses the Tremere Founder and merges with nearly the whole human race.

Immune to Animalism, Dominate and Presence.

In the "Nightshade" Gehenna scenario. Art by Matthew Mitchell 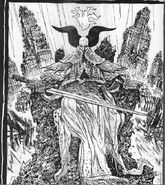 In "The Crucible of God" Gehenna scenario. Art by Michael Gaydos

Mekhet, a rumored sibling of the Eldest.