The Triat are three of the greatest entities in the spiritual hierarchy: the Wyld, the Weaver, and the Wyrm.

In the mythology of the Garou and other changing breeds, these three great spirits are responsible for the creation, preservation, and destruction of all things. As in most mythologies, there are multiple stories of the Triat, many contradictory. Opinions differ as to whether they created or were created by Gaia, and whether all three were created at the one time, had always existed, or created each other in a specific order.

Theurges debate whether the members of the Triat are great spirits or another order of entity entirely, but it is known that, like Gaia and the Celestines, they are beyond the comprehension of mortals. They are never encountered directly, and even the mightiest of their spirit children never claim to speak for their patrons.

The Triat are primal forces rather than gods, and their personification seems unique to shapechanger mythology; mages who are students of Spirit are rarely aware of their existence, even when visiting the spirit world, though they recognize similar concepts in three of the Avatar Essences: Dynamic (Wyld), Pattern (Weaver) and Primordial (Wyrm). By contrast, shapechangers generally see all things as influenced by the Triat, able to detect the "taint" of Wyrm or Weaver on mundane and spiritual things.

All shapechangers agree that originally the Triat were in balance. Some say Wyld created raw matter, life, and spirit while Weaver gave these creations form and function, and the Wyrm destroyed them to make room for new creations. Others insist that the Wyrm was once known as Balance, selectively destroying the creations of Wyld and Weaver to create harmony from the opposing forces of chaos and order.

Shapechangers also agree that the Triat is no longer balanced: the Weaver draws on the strength of humanity - its cities, technology, industry, and science - and is stronger than ever before. The Wyld's influence retreats as natural resources are plundered, the wild places of the world destroyed, and nature forced to do man's bidding. Most dangerous of all, however, is the Wyrm - it feeds on evil and destroys without distinction. Something holds it in check, but Garou see its power growing and fear the day it will break free to bring the ultimate destruction - the Apocalypse.

Stories differ as to how the imbalance came about, but one of the most common tells that Weaver trapped the Wyrm in her webs, allowing her order to be imposed without being destroyed while the imprisoned Wyrm, unable to escape, fell into madness. In contrast, some claim the Weaver is insane, and the Wyrm's lust for destruction is in order to destroy the overabundance of order.

As a result of the threat of Wyrm and Weaver, most shapechangers revere the Wyld above the other members of the Triat, seeing it - and Gaia - in need of protection.

There are exceptions, however; the Ananasi, for example, revere all three equally, though each individual champions just one. The Weaver's main allies are human, though the activities of the Technocracy also give it great strength.

The Wyrm has only one group of devoted shapechangers: the Black Spiral Dancers, a tribe of werewolves once loyal to Gaia who were corrupted while battling the Wyrm. Hindu mages and vampires refer to the Triat by the Hindi word Trimurti, and vampires who simultaneously worship all three of the Triat refer to the Triat as the Primordia.[1] As vampires bear the taint of the Wyrm when scrutinized by feral Gifts, combined with vampires' love of cities and civilization (bulwarks of the Weaver), most shapechangers bear vehement enmity against vampires. 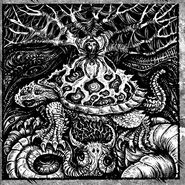 representation of the working of the Triat