3rd (through the diablerie of Saulot)

Tremere was a powerful mage turned vampire. While he was mortal he was one of the founders of the Order of Hermes and creator of House Tremere, that would eventually become the vampiric Clan Tremere.

He tested many spells to create eternal life, but found them all fatally flawed. Finally, he concluded that the only form of immortality, without severely degrading the use of magic, was vampirism.[1] After becoming a Cainite, he diablerised Saulot in 1133 CE. However, Saulot had manipulated Tremere into diablerising him, and the souls of the two were believed to be locked in internal conflict. This conflict was expressed through a number of bizarre Vicissitude mutations, including Tremere shapeshifting into a huge, three-eyed white worm which was kept in the depths of the Vienna Chantry and tended to by Etrius.

Saulot had taken full control in 1998, and Tremere's soul took refuge in Etrius' body, then in Goratrix, whose soul he expelled into a mirror. The status of Tremere's original, mutated body after the destruction of the Vienna Chantry is unknown.

The tall, dark and foreboding Tremere was the vaguely tragic founder of the House and clan that bear his name. Tremere was an eastern European mage who was known for being cold-blooded, brilliant, and a radical. He had received his training under master Guorna, and was one of his senior pupils alongside a young Master Tytalus. Tremere and Tytalus were raised together as brothers.

This pair of Guorna's pupils had not technically been invited to the event that marked the Pax Hermetica in 767 due to their youth and inexperience, but both of them attended nonetheless since their master had died after receiving the invitation. Once he was inducted into the Order of Hermes during the early Dark Ages, Tremere proved to be ambitious enough to create his own house (most Hermetic Houses were named after titles or mages who existed near the founding of the Order), as he was unwilling to yield to Tytalus, who had similar sentiments and founded House Tytalus instead.

Tremere was the youngest and weakest of the Order's founders, and compensated by establishing a strict, militaristic culture for his House. House Tremere was structured like a pyramid. Apprentices were assigned sigils to represent them, and were unable to progress upward in the House unless they had defeated their superiors in Certámen, a form of non-lethal magical dueling that Tremere had pioneered.

Tremere was the mage initially responsible for the purge of House Díedne. He accused them of diabolism and human sacrifice, and the Order expelled the House and hunted down its members. It is possible that Tremere's accusations were false, and intended as a distraction from his House's own secret atrocities.

As with other Hermetic mages, Tremere found that the encroaching, if nascent, Consensus was affecting vital Hermetic tools, in particular the longevity potions that allowed him and his peers to live for so long. Casting for solutions with his disciples, he eventually settled on a ritual involving a potion concocted by Goratrix using vampiric blood that would (theoretically) provide all the benefits of vampirism without any of the side effects.

It half worked. Following the Ritual of Usurpation, Tremere and his councilors found themselves converted from a respected, Hermetic house into pariahs among the Order of Hermes and the vampires whose blood they had stolen to convert themselves into undead. Furthermore, with no knowledge of vampiric society, the fledgling bloodline found itself with no magical resources – the potion shattered their avatars, leaving them unable to work True Magick, not to mention the route to obtaining the vitae necessary to perform the ritual involved the destruction of a significant Tzimisce elder, the childe of Voivode Vladimir Rustovich. An act that has since instigated the permanent enmity of an entire clan, most especially its own population of potent Koldunic Sorcerers.

Tremere rallied his students and launched an intensive program of research and rebuilding that shook vampiric society. They developed a blood-fueled imitation of Hermetic theory, the Thaumaturgy discipline, as well as horrors such as Gargoyles to defend the fledgling line. In the meantime, the Tremere searched out additional sources to provide them with social defenses against the vampires who, to a clan, seemed singly intent on exterminating them. Travelling extensively under false identities to gather information about vampiric society, he learned about Antediluvians and resolved to create a true Clan by diablerizing one. He initially chose Set, but later changed his target to Saulot.

After the diablerie, Tremere was almost immediately knocked into a torpor lasting centuries. His body underwent grotesque physical mutations, including growing extra eyes and his limbs retracting into his body. He was able to surface only briefly to guide the clan, though it is unknown how much of the guidance was from him, or the soul of Saulot speaking through him.

In 1999, Tremere fled to the body of his former lover Goratrix, who had long ago defected to the Sabbat. He traveled in Etrius' body to Mexico City, where he manipulated Goratrix into opening himself up to possession. After possessing Goratrix, he attempted to regain his Third Generation status by sacrificing all of the Tremere Antitribu at once to absorb their power. At that point, along with his clan, he prepared for Gehenna by preparing rituals of a power previously unimagined.

These rituals also half worked. In one of the Gehenna scenarios, Tremere uses a potent ritual channeling all of humanity's true name to defeat the Tzimisce Antediluvian. The ritual backfired and turned what is left of humanity into part of Tzimisce.

In Vampire: The Masquerade 5th Edition, Tremere is presumably still occupying the body of Goratrix, and may be the controlling force behind the newly re-emergent House Goratrix. 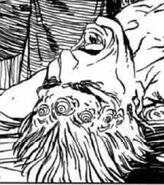 Tremere in his battle against Saulot 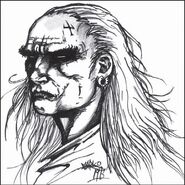