Toy is a Samedi quadriplegic who dwells in Montréal. An insane vampire housed in a toy box, he belonged to Les Misérables pack but was recently won by the Wretched pack in a bet.

Nothing is known of the completely feral Samedi known as "Toy", save that he failed Creation Rite sometime before 1800 CE and that he lay in torpor in his grave until 1852. Toy's Embrace was more likely a joke than anything else; he was born without arms or legs and was thereby unable to dig his way out of his grave.

When Saint-Antoine Cemetery was dug up and moved in 1852, the Sabbat exhumed those vampires who never survived their rites. When Toy was found, Preacher managed to convince Archbishop Strathcona that the Samedi was never given a test comparable to his abilities. After a great deal of badgering (and some suspect the use of Dominate), Strathcona agreed to retest the diminutive Cainite.

Toy was brought out of torpor and put in a toy chest along with another vampire who was undergoing the Creation Rite. After an hour, the chest was reopened and Toy, half-floating in a pool of blood and gore, was declared the winner. He thus earned his nickname and was kept by Les Misérables as a "national treasure" until he was won by the Wretched pack in a bet.

He still rests in his box, completely insane, sealed up every night until feeding time. Les Misérables sometimes use him to send neonates through their Creation Rites, but none have survived.

Toy is a quadriplegic. No arms and legs. Filth, blood, grime, and chunks of flesh cake his face and clothing. His mouth is filled with razor-like teeth. Imagine a rage-driven, decomposing monster without the capacity to express his fury due to missing limbs. Toy is much, much worse. 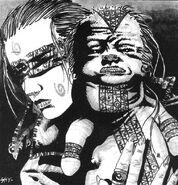 Muse and Toy, from Montreal by Night. Art by Christopher Shy

Retrieved from "https://whitewolf.fandom.com/wiki/Toy?oldid=215261"
Community content is available under CC-BY-SA unless otherwise noted.