Duke Topaz is a Seelie Troll of House Gwydion and ruler of the Kingdom of the Feathered Snake.

Duke Topaz is the paradigm of a commoner elevated into House Gwydion, having been inducted into the house after a glorious and highly distinguished martial campaign and granted control of his kingdom when it became clear that no weaker lord would do. Though probably the most competent general in all of Concordia, he is constantly criticized by commoners and nobles alike for his apparent inability to deal with the Nunnehi menace in his kingdom. The nobility distrusts him for several other reasons as well, not least among them his membership in the Brotherhood of Thor, or his infamous father, General Lyros. Like many of the most skilled generals in history, he would prefer peace and reconciliation to violence. The Nunnehi, however, are mostly unreceptive to his entreaties, forcing him to plan brilliant and ruthless campaigns against them. Rumors abound of the Shadow Court's involvement in the Nunnehi revolt, yet no hard facts exist to support them. Still, little else explains the inability of Concordia's best to deal with the problem. Additionally, Mexico is a stronghold for both the Sabbat (who have an alleged alliance with the Shadow Court) and the Pentex Corporation. At least one Mexican subsidiary of this company is aware of the fae, and recent attacks by hideous creatures have been recorded. Topaz's knights are a powerful coalition of trolls, sidhe and other kith, but they are increasingly hard pressed to defend the kingdom. As of late, he is showing signs that his position is aging him, which is odd considering his apparent agelessness until recently. There have been murmurings of dark magic in this, but again, little proof is available.

Topaz is one of King David's best, most trusted generals. If he can't save the kingdom, no one can. 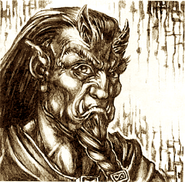 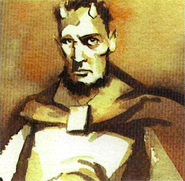 Retrieved from "https://whitewolf.fandom.com/wiki/Topaz_(CTD)?oldid=210094"
Community content is available under CC-BY-SA unless otherwise noted.