Tobias Smith is a prominent member of the Montréal Sabbat and sire to the former Archbishop Carolina Valez. He is a former member of the Lost Angels pack.

Smith was received the Embrace in the archipelago of Malta, and has been a loyal follower of the Sabbat and its goals ever since. Earning much respect in the Sabbat Civil Wars, he was promoted to Templar and assigned to protect Cardinal Desmoines in Mexico City during the Great War.

His career was long and distinguished and he could have attained the rank of Cardinal himself had he not become so distracted by a Mexican girl called Carolina Valez, who would become his childe in the future. Loving her with deep intensity, he protected Carolina and paved her road to success, aiding her whenever he could.

Tobias joined her pack during her mission to Los Angeles and has remained faithful by her side ever since, knowing of Valez secrets and keeping them safe. Although the two do not often share an opinion, they know that their different worldviews strengthen their pack and respect and understand each other.

After his childe failed during the monomacy for the archbishopric of Montréal, Smith turned away from her and instead joined Ezekiel, assuming the role of a mentor to the young Cainite. 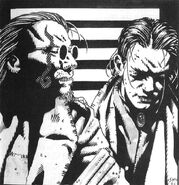 Gharston Roland and Tobias Smith, from Montreal by Night. Art by Christopher Shy
Add a photo to this gallery

Retrieved from "https://whitewolf.fandom.com/wiki/Tobias_Smith?oldid=220435"
Community content is available under CC-BY-SA unless otherwise noted.