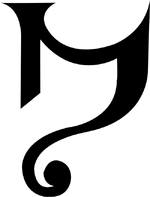 Archmasters of Time have looked full in the face of time itself. They have learned the final and most fundamental truth about time and space; it may be fluid and inconstant, but it is one large piece. It is human beings who tend to cut it into consumable pieces; years-months, days-weeks, etc. Because, of this revelation many Arcs of Time have a serenity about them that is reflects in their gentle eyes. Archmasters may shunt objects into the past and future. One can rewrite the histories of others, changing their very souls, theirs or someone else’s. One can distort time so much that a scene from the past or future becomes manifest. And this isn’t to speak of the most speculated upon power of archmastery; time travel. An Arc of Time can walk back in time like most people walk down hill. Because if time is one piece and is equal to space, then the journey through time should be a simple as turning a corner. Another ability of an Arc is to be able to hide between the moments, or outside of time itself.

Retrieved from "https://whitewolf.fandom.com/wiki/Time_(MTAw)?oldid=79923"
Community content is available under CC-BY-SA unless otherwise noted.