Baron Thomas Feroux was the head of the Gangrel scion family in Constantinople, under the protection (and orders) of Gesu.

Thomas was born in northern France as the only son of a minor nobleman. When he was young his parents were killed by a wolf pack, he was sent to his uncle, a sour and brooding man, who did not care much about him, so that Thomas only escape was hunting far away. When he turned 17, his uncle died and left him to be the inheritor of all his family goods.

Still discontent, Thomas decided to make a pilgrimage into the Holy Land, becoming as sour and cruel as his uncle on his way, as he had to steal, lie and betray in order to finance his way. Unknown to him, his parents were not killed by wolves, but by a starving Gangrel, who Embraced his mother after he drained her dry. Marie Feroux has followed him ever since, watching over Thomas. But with every dark deed her son committed, she sank deeper into the claws of the Beast. Finally, when he beat a young woman to death, she lost control and fed on him in a brutal frenzy until he was dead.

Ashamed, she embraced him and buried him, and awaited for the sun laying on his makeshift grave. When Thomas arose he founded only his mother's pendant amidst a pile of ashes. Starving and unsure about what happened, he went to the inn, where he killed every last one of the attendants in a bloody frenzy. He was only appeased when a monk of the Divinity Within recognized him for what he was. Theoleon, a Gesudian monk from Constantinople, instructed him in the ways of the undead and took him with him to the city, where Thomas befriended Symeon.

He made a vow to protect the Obertus and the Tzimisce for the rest of his existence, a pledge that made him one of the scion families of the city under the Tzimisce. When Constantinople is sacked during the Fourth Crusade, Thomas fought valiantly to protect the Library of the Forgotten. Eventually, he joined the Inconnu, oblivious to their involvement in the fall of his city. 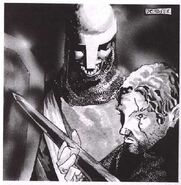 Retrieved from "https://whitewolf.fandom.com/wiki/Thomas_Feroux?oldid=211801"
Community content is available under CC-BY-SA unless otherwise noted.