Thomas Arturo is a Toreador Harpy in New York City.

Thomas’s introduction to the world of the Kindred came through his professional life. He was an assistant to the prestigious architecture firm of Richard Meier & Partners in New York City. Arturo had worked on a design for an exceptionally wealthy client. At the project's completion, the client decided that she’d like to preserve the talents of the person creating her haven. Although dubious at first of his client’s bizarre form of payment — he almost greeted the sunrise out of despair during his early unlife — Thomas grew to understand that along with its drawbacks, unlife had many benefits. In fact, he retains a few professional contacts with Meier & Partners to this night, many of whom joke that he hasn’t aged a day since they met him. While a mythical “day job” keeps Arturo from meeting with his associates during the daylight hours, he’s perfectly able to “freelance” for them at night.

As Meier & Partners’ fame spread in the mortal world, it spread as well in the Kindred world, and Arturo rode along with it. As one of the few Kindred who made his haven in New York before it was liberated from the Sabbat by the Camarilla, Thomas has been a part of the social elite from the moment he completed his sire’s haven. He’s done designs for mortals (the musician Moby is rumored to be among them), Kindred of Manhattan, and even Cainites of the Sabbat who knew of his reputation when they were the prominent sect in the city. It is a sign of great prestige to live (or otherwise) in a Thomas Arturo design, and that prestige is even more quantifiable among Kindred.

This prestige paved the way for Thomas to become one of the harpies after the Camarilla’s victory over the Sabbat. As the undead would do almost anything to have Arturo design their havens, he acquired a caliber of social gravity usually reserved for primogen and other policymakers. In the absence of such a body, Arturo became one of the harpies, whose opinions could make or break a Kindred. While he has yet to snub a Kindred so badly that it’s better for the poor Lick to leave town, Arturo has reserved his favor for those in the traditional power bloc of undead society: the Ventrue (VTM), Toreador, and (albeit grudgingly) Tremere. Some of his more recent projects include the guest library and sitting room of the Tremere’s Maupassant chantry, the penthouse haven of his fellow harpy Hellene Panhard, and an ambitious gallery/haven for a wealthy Toreador in TriBeCa. Arturo hasn’t made many amicable contacts among the Brujah, Malkavian, or Nosferatu, though he does have a respect for Calebros that the Nosferatu seems to reciprocate.

When working for Kindred, Arturo is known to accept almost any kind of payment that suits his fancy at the time. He’s designed havens for no recompense other than prestation, accepted cash or stock options, and even taken a blood bond. While he does little design on less than the million-dollar scale, he has been known to redecorate interiors for significantly less money (or whatever form of payment he chooses to accept). Many of the candidates for the princedom plan to tap Arturo for designs in locations they wish to designate as Elysium if their claims to the domain are successful. 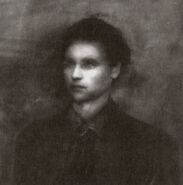 Retrieved from "https://whitewolf.fandom.com/wiki/Thomas_Arturo?oldid=230817"
Community content is available under CC-BY-SA unless otherwise noted.