Theora Hetirck is an infamous Euthanatoi mage and the Herald of Senex.

Theora Hetirck grew up in a family of Baltimore morticians. She Awakened at the age of 15, when one of her "clients" sat up, affected by Theora's unconscious magic. The animated corpse was once a Euthanatos mage. Theora merged with the soul of the incoherent thing as it shambled out of funeral home and smashed itself to pieces in the traffic of a nearby highway. Thus, Theora underwent a kind of Agama and learned the fundamentals of Thanatoic magic without ever having a proper mentor.

She experimented on her own, reanimating corpses and taking them as her playthings. One day her father discovered her at play with the dead and, thinking she was possessed, began to beat her. Theora picked up a scalpel and slit his throat.

She wandered the streets for a year before Voormas picked her up. He shielded her from other Euthanatoi and trained her in his own perverse ethic, torturing her when she fell out of line. It was a combination of talent and terror that turned this small, shy woman into one of the Consanguinity of Eternal Joy's best killers.

When the Council started to investigate the Consanguinity, they assigned her to high-risk missions. She was captured and given to Senex as an apprentice. Over the next few years he removed Voormas' mental controls and healed most of her emotional trauma. In the wake of the Reckoning he choose her to be his personal Herald.

Theora is a slender woman in her late 20s. Her large eyes used to give her a childlike quality; now they add depth to her gaze. Nowadays she usually wears blue jeans and oversized shirts with a set of prayers beads. She smiles slightly while she speaks. Her voice is kind, confident and slightly tired. Her dark brown hair is shot through with gray – a testament to the horrors she has endured. She is never armed.

Nominally Madzimbabwe. Her own magick favors Greek and Indian rites 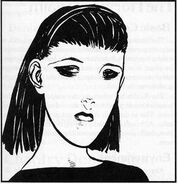 Retrieved from "https://whitewolf.fandom.com/wiki/Theora_Hetirck?oldid=236992"
Community content is available under CC-BY-SA unless otherwise noted.