The Players Guide to the Sabbat

The Players Guide to the Sabbat

PDF: $9.00
The Players Guide to the Sabbat is the first sourcebook to fully describe the Sabbat. From the nadir of despair comes the beginning of greatness. Although the Sabbat is a major sect of vampires, they had previously been lightly detailed and were implicitly restricted to the ranks of Storyteller characters. Many prominent Sabbat-related elements of the setting, such as the antitribu and the Paths of Enlightenment, were introduced for the first time in this book. Additionally, the Lasombra and Tzimisce were described for the first time in this book; previously, nothing was known of those clans other than their names, as mentioned briefly in the first edition of the Vampire: The Masquerade Rulebook.

By Any Means Necessary
The Sabbat: a sect of diabolists and murderers whose sole purpose seems to be wanton destruction. These Night Fiends reject the ancient laws of the undead and revel in the fear and hatred they inspire, considering them tributes to their strength and courage.

The Prince of Freedom is Death
But there is a method to their madness. They are the true saviors of the undead, something only they can or will see. The Sabbat has gathered power for centuries, allying with the darkest powers of the supernatural, growing and expanding with only one purpose — the utter destruction of the Antediluvians.

The Players Guide to the Sabbat includes:

An introduction to who and what the Sabbat are, how to use this book, and the view of the Sabbat from the outside, from other vampires to non-vampires.

Chapter One: Inside the Sabbat

This chapter focused on the Sabbat perspective of those outside the sect, guarding secretes, and their Lexicon. There is a quick overview of the Clans of the Sabbat. The structure of the Sabbat describes its internal makeup which includes information about the Black Hand and the Inquisitors. Learn the History of the Sabbat and what it is like today. See how the Sabbat fair around the world.

This chapter also explores the Sabbat Ideology, Holy Crusades, Sabbat Tactics and how they conduct scouting missions. There is a small section on the uses of Mortals as well as who are Allied to the Sabbat. And finally a section on Sabbat Weaknesses.

Chapter Two: Running with the Sabbat

This chapter introduces the Sabbat Pack, unlife in the Sabbat, how Sabbat recruits are made, how defectors from other sects are trained, Vinculum, information on Sabbat Rituals such as the Auctoritas Ritae and the Ignobilis Ritae, and some notes about Sabbat justice.

Chapter Four: The Paths of Enlightenment

This is the introduction to the Paths of Enlightenment. These Paths help members of the Sabbat to keep the Beast from completely ruling. Each follow rigid codes of conduct and study the philosophy of their chosen Path.

This chapter introduces new secondary traits for the Sabbat. New Disciplines such as Dementation Obtenebration, and Vicissitude, a new Thaumaturgy Path (Gift of Morpheus) and new Thaumaturgical Rituals. There are some Sabbat only Backgrounds and new Merits and Flaws. Explanations of the Sabbat Virtues. Finally there is information about Vinculum, Torpor, Frenzy, and Tips on Playing Sabbat Characters.

Appendix One: Unusual Weapons for Vampire

Unusual weapons that are not in the original Vampire book but tend to be used by members of the Sabbat: Chainsaw, Machete, Straight Razor, And Flamethrower.

Eyes of the Sun - A Native American Shamanistic Society that numbers only 20 members. They are Allies of the Sabbat and are all skilled to some degree with the Magical arts.

Penumbra of the Gray Squirrels - A Native American Shamanistic Society that numbers only 20 members. They are not only Allies of the Gangrel Antitribu but also of Lupines as well. They share some special connection with the land that bestows on them mysterious and unexplained abilities to all its members.

All great truths begin as blasphemies.

Right now. I am an Antichrist. I am an anarchist. Don't know what I want but I know how to get it. I want to destroy. Pacify. 'Cause I wanna be Anarchy.

Ever dance with the devil in the pale moonlight? I always ask that of all my prey.

A wise skepticism is the first attribute of a good critic.

Your guilt consists of this: I want to eat you up!

He goes seeking liberty, which is so dear, as he knows who for it renounces life.

Three may keep a secret if two of them are dead.

He bore the curse of the seed of Cain, whereby God punished the grievous guilt of Abel's murderer. Nor even had Vain cause to boast of the deed of blood. God banished him far from the fields of men; of his blood was begotten an evil brood.

Do you know that all the great work of the world is done through me?

Go put your creed in your deed,

Nor speak with double tongue.

He must be a demon flown first class from Hell, advance agent for the Anti-Christ, if he is not him in person.

Roses have thorns and shining waters mud, and cancer lurks deep in the sweetest bud

Clouds and eclipses stain the moon and sun, and history reeks of wrongs we have done

After today, consider me gone

To search for perfection is all very well, but to look for heaven is to live here in hell

After today, consider me gone.

Did you think the lion was sleeping because he didn't roar?

Make a promise for a new life

Make a victim out of your life.

What if I told you there was no place you could run to to hide from your fears? Where good is bad and bad is good and all the tears you cry no one can hear?

What fools these mortals be.

We have no eternal allies and we have no perpetual enemies. Out interests are the eternal and the perpetual, and these interests it is our duty to follow.

- Henry John Temple, Speech in the House of Commons

You saw his weaknesses, and he will never forgive you.

We few, we happy few, we band of brothers;

For he today that sheds his blood with me

Shall be my brother.

Raise my eyes, she stands

Are you happy now?

I walk the thin line for you.

Do just what you say to,

With fear as my friend.

Ya eatin' death cause ya like gittin' dirt from the graveyard, chips and casket cover clips-dead women hips ya do the hump with-bones. Nuttin but love bones. Lifestyles of da liver-en-dead.

What more felicity can fall a creature,

Than to enjoy delight with liberty.

- Edmund Spenser, The Fate of the Butterfly

What though before us lies the open grave?

Pressed to the wall, dying, but fighting back!

Submit to the present evil, lest a greater one befall you.

So what - it's your problem

To learn to live with;

Destroy us or make us saints.

We don't care; it's not our fault

That we were born too late.

Every tradition grows ever more venerable - the more remote is its origin, the more confused the origin is. The reverence due to it increases from generation to generation. The tradition finally becomes holy and inspires awe.

This is music to march to.

O! for a Muse of fire, that would ascend

The brightest heaven of invention!

Whatever is not forbidden is permitted.

Some are born to sweet delight.

Some are born to endless night.

I'm a young man at odds with the Bible, but I don't pretend faith never works.

Mountains of endless falling, for all my days remaining,

What would be true? Sometimes I see your face, the stars seem to lose their place

Why would you want me to? And what would it mean to say, that "I loved you in my fashion?"

The great decisions of human life have as a rule more to do with the instincts and other mysterious unconscious factors than with conscious will and well-meaning reasonableness. The shoe that fits one person pinches another; there is no recipe for living that suits all cases. Each of us carries his own life-form - an indeterminable form which cannot be superseded by any other.

- Carl Jung, Modern Man in Search of a Soul

Morale is a state of mind. It is steadfastness and courage and hope. It is confidence and zeal and loyalty. It is elan, espirit de corps and determination.

Life's a tough Proposition, and the first hundred years are the hardest.

Of such deep learning little had he need,

Ne yet of Latin, ne of Greek that breed

From whence arise diversity of sects,

Force is not a remedy.

Nora Clemones, Noddist - Bishop of Quebec Vincent Day, Sabbat Paladin and Patriot Ezekiel Donner, Sabbat Hierophant and Harmonist. Djuhah - Seraph of the Black Hand. Melinda Galbraith - Regent of the Sabbat. Leila Monroe, Sabbat Priscus and Unifier Joseph Pander - Leader and Founder of the "Pander" bloodline of Caitiff. Priscus. Vladamir Rasputin, Cathari/Albigensian - Sabbat Poet and Dominion of the Black Hand Murray Sutton, Necronomist - Sabbat Monsignor Vlad Tepes, Count Dracula - Mentioned as a member of the Tzimisce. Vestgeir - A Ravnos who picked up the pieces after the failed Anarch Revolt; Some Sabbat members believe him to be Caine. He disappeared sometime between the 1500s - 1600s. Baba Yaga, the Iron Hag. The Sabbat, at this the time of publication, did not know she existed. Johnny "Big Dog" Yeats, traitor and Corrupter. 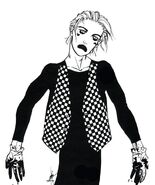 Serpent of the Light Mystery Man