The Tengu are the Asian cousins of the Corax. Allied with the Beast Courts of the Emerald Mother, they are nonetheless in close contact with their western brethren.

The Tengu share the basic traits of the Corax, like their tendency for gossip, their vulnerability to gold, and the protection of Raven and Helios. They have developed their own martial art to use when in Crinos form, mostly utilizing their beak and attacking weak spots like eyes.

The Tengu were responsible for much of the knowledge Asian hunters have about the Shen, as their drive to share information also included those humans who venerated the Emerald Mother. They also spread deliberate misinformation, so that hunters would have no knowledge of the weaknesses of the Hengeyokai.

Priests were often favorite victims of the Tengu, who enjoyed harassing the pious and trying to alter their worldview into something more to the wereravens' tastes. These practices, however, have fallen by the wayside since the dawn of the Information Age.

Like their western pendant, the Corax propagate via the Rite of the Fetish Egg.

Despite their individualistic lifestyles, the Tengu serve readily within Sentais and are often found in positions of counselors in the Beast Courts, thanks to their superior numbers compared to most other Changing Breeds.

The Tengu entertain their own secret society, the Grey Clouds Temple. Within it, they train abducted humans to hunt bakemono, Wan Kuei, and rogue wizards. The Tengu are carefully to hide their own weak spots from their pupils and most of these "goblin slayers" find a violent end.

The Tengu have access to the three basic forms of the Corax.

As creatures of little formality, unaffiliated Tengu follow a loose Renown system that is similar to the Mirror's path; Wisdom is of paramount importance to them as a race. However, most Tengu are sworn to the Courts, and obey the rules of their chosen (or assigned) auspice. 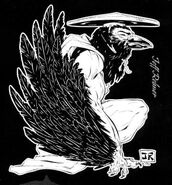 Retrieved from "https://whitewolf.fandom.com/wiki/Tengu?oldid=235656"
Community content is available under CC-BY-SA unless otherwise noted.