Tears is a twisted pierrot of the Toreador antitribu. He is a member of Zarnovich's Circus, from the city of Montréal.

A "Pierrot" is a sad clown and Tears is the ultimate Pierrot.

In life he was a male prostitute working the streets when he was approached by The Rose and Creamy Jade. The two bought him for a night of passion, but instead Creamy tortured and humiliated him with degrading acts. Tears' mind came close to shattering, but as he stood on the brink of death, Creamy Jade Embraced him only because she had never created a childe before.

Tears enjoyed her love for a few weeks, but sensing she would soon tire of him, he left and joined Zarnovich's Circus – a collection of the most psychotic, deranged, and deviant vampires of the Sabbat. They travel around North America performing in front of all audiences, attempting to subvert their sanity with dark and perverse circus acts. Zarnovich is the leader of the group, a Tzimisce who likes to conduct experiments with Vicissitude.

Tears performs as a clown there. His face has been permanently altered by Zarnovich to a chalk-white skin, two red tears, with black lips that has one pointing upward for a smile and the other down into a frown. Tears uses Dementation and Presence to instill every possible emotion into his audience. By the end of his performance they are either insane or catatonic.

During the winter the circus stays in an abandoned amusement park. Tears' haven is a house of mirrors designed to mimic his passion for emotions. 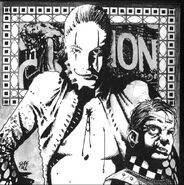 Tears and Midget, from Montreal by Night. Art by Christopher Shy
Add a photo to this gallery

Retrieved from "https://whitewolf.fandom.com/wiki/Tears?oldid=209387"
Community content is available under CC-BY-SA unless otherwise noted.