Tatiana Stepanova is a survivor of the Week of Nightmares that swept over her clan. One of the rare few Ravnos left in the world, she works as an Alastor under Justicar Lucinde.

Tatiana Stepanova was the daughter of a Russian noblewoman who dallied with an itinerant raconteur. After her birth, her father sensed something not quite right with her and never really liked the girl. As Tatiana grew older, the feeling became mutual. She grew up a disobedient child and did whatever she could to vex her parents. When she learned that she was to be married to an old fat man to cement family alliances, she ran away, often posing as a man and surviving by burglaring.

On one of these occasions, she met her future sire, Vasiliy. He taught her little of the Kindred and primarily used her for her talent at burglary. Tatiana deeply resented the Embrace; the thirst for blood violated her sense of humanity on a primal level, and the strong compulsion to conceal her true self bothered her in a way she did not fully understand. It took Tatiana three decades to break free of Vasiliy's hold, after which time she used the few tidbits of information her sire had dropped to wind her way into Kindred society.

After learning more of the other clans, Tatiana traveled across Europe, meeting and dealing with Kindred and building up the information she needed to more fully conceal her true self. Eventually, she settled on a Brujah identity, although she used Malkavian and Gangrel disguises from time to time. She left Europe for the United States after the French Revolution. In her routine efforts to make herself useful, she fell in with the Ventrue Archon Lucinde and worked with her on several occasions.

In the 20th century, Tatiana has also fallen in with Anarchs and associated with Lilith Storm, a prominent Brujah anarch in Seattle, when Petrodon was destroyed. She contacted Lucinde to warn her about rumblings among the anarchs, only to receive an invitation to work for the new Ventrue Justicar as one of her Archons, being made an Alastor to aid Lucinde in her hunt against the Anathema. She has a rivalry of sorts with the Ravnos Anathema known as Alexis.

She survived the Week of Nightmares primary because there were no Ravnos around her. The violent images and feelings drove her into hiding until the event ended, further insulating her from any potential consequences. 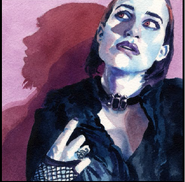 Retrieved from "https://whitewolf.fandom.com/wiki/Tatiana_Stepanova?oldid=205450"
Community content is available under CC-BY-SA unless otherwise noted.