Szlachta are a type of ghoul used by vampires of the Tzimisce clan as soldiers, bodyguards and sentries.

The term szlachta is a Polish word meaning noble (or gentry according to Clanbook: Tzimisce), as szlachta are considered superior to other ghouls. They are created from either human or animals, and fleshcrafted in order to increase their combat prowess. While this process makes them more powerful, they are also hideously deformed.

Each szlachta emerges from its creator’s laboratory unlike any other, since the process requires handwork. Some features are fairly standard despite the variations. A typical szlachta has spikes, armored plates or both. The Tzimisce creating the ghoul removes all unnecessary fat, or transfers it to areas where extra padding might come in handy, such as over vital organs. Most Tzimisce replace the ghoul’s entire skin with something tougher while some add on extra layers to create whole-body calluses or otherwise increase the ghoul’s capacity to resist wounds. Almost all szlachta possess armored sensory organs with increased sensitivity, so as to make better observers - but this frequently results in the szlachta going insane or being permanently crippled.[1]

To reduce the ghoul’s automatic resistance to modification, most Tzimisce starve their subjects before setting to work. Some creators outright attack their creations-to-be, using injury to further weaken the target body’s defenses.

In 1194 A.D., the Tzimisce Ahzra took control of the Bonn Silver Mines east of Prague, with her army of szlachta. The ghouls made nightly raids into Prague, killing and mutilating the townsfolk, until a crusader named Christof Romuald ventured into the mine and slew the Fiend. 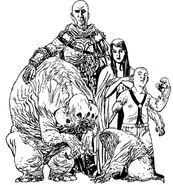 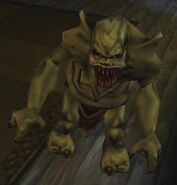 A szlachta from Vampire: The Masquerade - Redemption.[2]