The Succubus Club is an iconic nightclub run by vampires in the World of Darkness. Originally the foremost of Chicago's Elysia, a franchise of the club took its activities on the road in the late 1990s, moving from one American city to another.

The original site of the Succubus Club was opened in Chicago in 1982 under the management of Brennon Thornhill, childe of Chicago's Prince Lodin. The club served as the premier meeting place and Elysium of most of the vampires of the greater Chicago area (including many of the Kindred of Gary, Indiana). The Club was actually constructed over the haven of the torpid methuselah Helena, thanks to the efforts of her ghoul, Prias.

In 1993, the War of Chicago erupted between the Kindred and Lupines of the greater Chicago area. In a Lupine assault on the Club, a number of Kindred were slain, including Thornhill and Lodin. The Club reopened not long after under the guidance of the neonate "Portia" – actually a cover identity for Helena herself, who had awakened in 1991. Several years later, an actual neonate took on the identity of Portia and established a mobile Succubus Club in homage to the original. 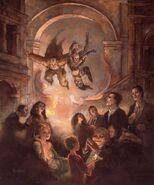 From The Succubus Club: Dead Man's Party. Art by Ken Meyer, Jr.
Add a photo to this gallery

Retrieved from "https://whitewolf.fandom.com/wiki/Succubus_Club?oldid=204880"
Community content is available under CC-BY-SA unless otherwise noted.