Everything lovable about the piskies is despicable in the spriggan; they're hateful, greedy little bastards. Most are exceptionally cruel and play nasty tricks on downtrodden mortals. Not a few hang out with the most vicious redcaps and engage in all manner of terrible deed. Generally lazy, spriggan are good at only one thing: guarding treasure. This is why the worst of the Unseelie and Shadow Court members bother to keep them around at all.

Seelie piskies are shocked and revolted by these evil Thallain cousins. Sometimes, the nastiest Unseelie piskies will hang out with the spriggan; a few even join their ranks. Needless to say, all Seelie and most Unseelie piskies tend to take a dim view of the spriggan in general and don't tolerate their presence for long. Fortunately, spriggan are relatively rare among the Thallain.

What strikes fear into both Seelie and Unseelie Kithain alike is the spriggan's penchant for kidnapping. When a human young one is taken, of course it's a tragedy, and many fae will be willing to assist in the rescue. But the terror increases when the child is a changeling. The birth of a faerie soul into a human child is, of course, a wondrous and happy event. For such a child to be taken by the spriggan and mentally tormented is cause for a seek and destroy mission against the kidnapper. Ninety-nine percent of the time, the child is found safe, if a bit cold and hungry. But dark and ancient legends speak of a few fae little ones that have not been rescued in time. If such an awful event was to occur in the present, the spriggan probably would be hunted to the ends of the earth and the Dreaming.

Spriggan look like uglier versions of piskies. Rather than having large, bright eyes, those of the spriggan are small and beady. All seemings have the dark craggy skin of a piskey grump. Moreover, spriggan lack the lustrous silver hair of the piskies; theirs is a dull gray, often hanging in matted tangles. Spriggan smell bad and generally wear filthy clothes.

Awwww, poor widdle thing. Did we spill your water? Too bad there's no more to be had today. How do you feel about that, you stinking pooka brat?

On Nockers — I'd probably not set after a nocker unless I was truly hurting for entertainment. Four times out of five, if somethin' needs guarding, a nocker's the source. 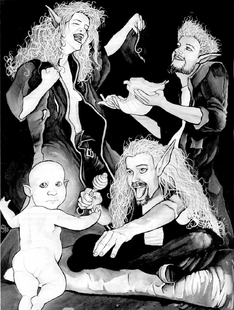