The Society of Leopold is a faction within the Inquisition who exist to pursue and fight supernaturals. They are a major threat to every group of supernaturals because of their extensive knowledge, training, equipment, preparation and fanatical zeal.

The Society of Leopold fully believes that the Apocalypse is drawing near and that all supernaturals, willing or not, are part of the army of the Antichrist. As self-appointed soldiers of Christ, they believe it is their divine duty to slay or otherwise neutralize as many supernatural threats to Christianity as possible before Christ returns to the world. 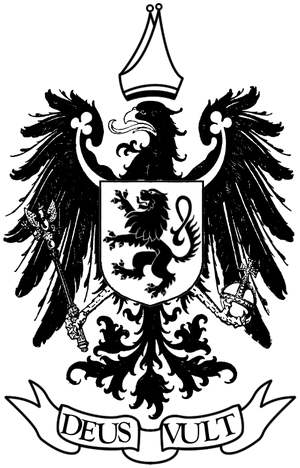 The Society of Leopold claims that their ideological roots lie in the Michaelites, a secret order founded by a converted Roman soldier that was dedicated on protecting the early Christians that hid in the Roman catacombs from the monsters that lurked within.

Their official formation, however, came with the advent of Leopold von Murnau, a German dominican who was granted special dispensation by Pope Gregory IX in 1231 to combat supernatural evil. Under Leopold's guidance, the society grew, encountering several strange supernatural creatures that abused and toyed with humanity for their own amusement. Although the Society was also pursuing "regular" heretics, like the Albigensians, they also attacked supernaturals of every faction. Among their victims, accusations and imputations flew around, as each group suspected their rivals of pulling the strings behind the new threat, unaccustomed to the fact that humans had began to realize their presence in their midsts.

When Innocent VIII published the Summis desiderantes affectibus in 1484, the Society had reached its peak, raging across Europe in a merciless crusade against the powers in the shadows. However, as the methods of detecting supernaturals were far from rarified, countless innocents burned alongside mages and vampires. It was during these times that the Society were turned into a secret society within the Church, out of fear of infiltration. The Testament of Leopold became the canon for the society, who was granted the Monasterio di San Michele in Rome as headquarters.

In 1658, the Society faced its first schism. Raffaele Renzi, a Florentine Franciscan, was charged with treason, as he had been found consorting with the enemy. Renzi tried to persuade his officials that some of the supernaturals were able to overcome their inherent evil nature by honest remorse and accused the Society of pride for judging who among the remorseful had the right to live. Renzi was sentenced to death and the Florentine Decree was commissioned to further define the orthodoxy of the Society.

Following the 18th century, the Society waned in both influence and power, as the Catholic Church had other problems to deal with. Some Inquisitors even considered breaking away from the Vatican, but realized that they depended too heavily on financial support from the Church. The Parisian Cenaculum even had to be disbanded due to troubles during the Revolution and the membership dropped to 50 active Inquisitors for all Church territories.

In the 19th century, the Society slightly recuperated. Pius X reorganized the Society in 1908 and officially released them from service to the catholic Church, allowing them to act more freely. Now unconcerned with doctrinal issues, the Society has dedicated it whole power to cleanse the world of what they believe to be the servants of the Adversary and prepare the world for the Parousia.

Like the Roman Church, the Society of Leopold is made up of a number of smaller divisions. The members of the Inquisition share a common goal — to deliver humanity from supernatural evil — but their interests and modus operandi vary and even clash. The four official sub-orders within the Society are:

But while some Inquisitors remain generalists, many find intellectual support and mutual ideology in smaller organizations known as "sects". Inquisitors are not required to join any sect, they only exist for mutual support regarding these ideological matters. There are 7 known sects among the Society of Leopold:

The Society of Leopold is led by the Inquisitor-General, who has absolute lifetime authority over its members and resides in Rome near the Vatican. Beneath him serve the Provincials, who are chosen by the General and assigned to specific geographical regions, where the supervise and coordinate the local Cenacula. Most Provincials refrain from joining their brothers in the field, instead acting as advisors, mentors or scholars. All Provincials meet annually in Rome to discuss the previous year's activities and plan for the next year. Even prominent witch-hunters outside the Society are invited to these Councils.

The contacts of the Provincials are the Abbés, who are responsible for maintaining and stewarding their Cenaculum. They are aided by the Censors, who are part of the Office of the Censor, who ensure doctrinal orthodoxy and rout out infiltrators, but also ensure that individual Inquisitors do not abuse their powers or Society funds.

Councillors are Inquisitors that have proved themselves as experienced and outstanding warriors against the forces of evil and are given this honor-title to reflect their progress. The ordinary Inquisitor usually holds the rank of Tertiary, pointing him out as one who has passed his novitiate. Inquisitors usually work together in cenacles, centered around their Cenaculum.

Below the Tertiaries are the Novices, who are educated over the various supernatural creatures that roam the night. Many Novices come from clerical ranks, but there is also a great population of laypersons, who have not been ordained as priests, as well as several women that have been included into the Society.

The ways Inquisitors act have changed over the years. The Society now acts in absolute secrecy, reflecting more modern-day detective work than medieval jurisdiction. Most Inquisitors use subtle clues (missing persons, strange mass-blackouts etc.) to search for their enemies. After a case is continually researched and deemed proper by the Cenacle, the auto-da-fé begins. Following this, the subject is hunted until its death or a truncation coming from a Censor.