For other uses of the name, see Sobek

Sobek is a legendary Mokolé Abomination, Embraced through rituals by Set himself. He is rumored to have the form of a massive albino crocodile.

Sobek is mentioned in the Isis Fragments[1] as the chieftain of the crocodile-folk who lived in the river Nile, in a time when gods walked the Earth. He teamed up with the vampire Wadjet and the Sons of Bubasti to protect Isis and her son Horus when the pair sought refuge in the island of Chemmis after the imprisonment of Osiris. Set eventually found them and took the pair of gods as captives. As for Sobek, well...

If Sobek exists at all, he is rumored by the elders of the Followers of Set to be a Mokolé Abomination, severed from Helios' grace by dark magics cast by Set, and damned to exist as an unholy mockery of all what his kind stands for. This would make Sobek not only an Abomination but also a fourth generation methuselah, thus making him one of the most terrifying beings to ever walk the Earth.

He is reputed to be slumbering in a Founding Temple of Faiyum, surrounded by a retinue of ghouled crocodiles. One of these crocodiles is said to be over a thousand years old, and to give oracles from Set's childe to the Abd'al-Sobek.

In general, the Mokolé are immune to the Embrace, resulting only in a Frenzied rampage that claims the life of the would-be sire and their own swift death once the sun rises. If it took a vampire as powerful as Set, an Antediluvian master of blood magic, to circumvent the blessings of a Celestine as mighty as Helios, Sobek is most likely the only existing Mokolé Abomination in the world. 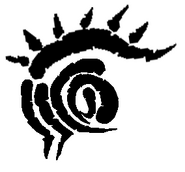 Non-canon glyph for Mokolé Abomination.
Add a photo to this gallery

Retrieved from "https://whitewolf.fandom.com/wiki/Sobek_(Abomination)?oldid=253186"
Community content is available under CC-BY-SA unless otherwise noted.