Brawler, influential Iconoclast, and notable Anarch from the nights of the Anarch Free State, Jack is rumored to have been a pirate in his mortal years and is considered a legend among young vampires of his clan.

Although Jack encourages people to think that he was a pirate captain, he actually never rose above the level of second mate. His wild temper caused fellow sailors to distrust him, and he was never able to muster enough support to become captain. He was, however, valued for the strength of his arm and for his loyalty to his shipmates. By the time he was 40, he had amassed a sufficient fortune to buy himself a pardon and retire to Barbados.

Jack tried to settle down, but after the egalitarian ways of the pirate life, the oppressive laws of the local grandees just grated on him. He soon found himself on the run for having beaten a little snot-nosed Don who tried to force him off the road. One of the local Brujah fighting against Ventrue expansion into the Caribbean found Jack dead drunk in a waterfront tavern, and offered him an eternity of fighting against the Dons. Never one to turn down a chance to fight, Jack accepted.

A presumably powerful and influential ancilla during the Final Nights, Smiling Jack is one of the most infamous of all anarchs. His appearance is unassuming – the wild hair and mangy look of a Brujah street bum, but from what has been pieced together, Smiling Jack is a clever planner and a master of the Potence and Celerity Disciplines, favoring them over Presence.

He almost undoubtedly knows many other tricks; however, he seems to eschew the use of manipulative Disciplines such as Dominate or Thaumaturgy. Jack's influence within the Anarch Movement is strong, though he absolutely refuses any formal leadership role. He acts as a mentor and, more importantly, as a friend to many vampires. He seems to have a particular dislike for both the Camarilla in general and the Ventrue in particular. He is not easily provoked into open battle, but his mischievous and underhanded tactics, and his tricks are legendary among young Anarchs.

There are tales that he was hunted down and brought before the Camarilla authorities to answer for his transgressions in 1999, right before Xaviar took the Gangrel out of the sect.[1]

Smiling Jack is known to enjoy disrupting the Ventrue reign in cities, mostly Embracing indiscriminately, provoking a rise in Caitiff numbers, and even going as far as to thread the events that would ultimately cause the Final Death of Sebastian LaCroix, the Ventrue Prince of Los Angeles in 2004[2]. It is rumored that Smiling Jack is one of the few modern vampires who have met Caine.

Following the death of Prince LaCroix, Jack felt the call back to the sea. He said goodbye to L.A, where he had spent most of the last two decades, and in 2005 set sail for the pirate nation of Libertatia in East Africa.[3]

Smiling Jack became a prophet for Gehenna during the Time of Judgment.

It is heavily implied in the novel VTM: Gehenna: The Final Night

that Smiling Jack meets his Final Death. He is killed by a Nosferatu named Okulos who was disguised as a vampire named Samuel; Jack let himself be killed to ensure that the thin-blood movement he helped start and raise would continue to fulfill Gehenna.

is no longer canon. 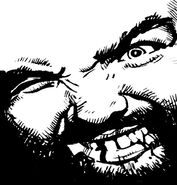 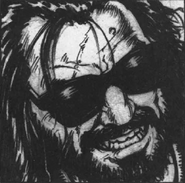 From Los Angeles By Night 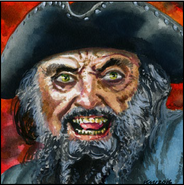 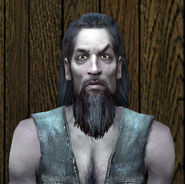 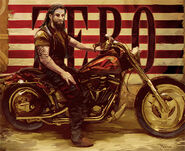 Smiling Jack, The Anarch VTES card. Art by Kieran Yanner
Add a photo to this gallery

Retrieved from "https://whitewolf.fandom.com/wiki/Smiling_Jack?oldid=277662"
Community content is available under CC-BY-SA unless otherwise noted.