Skelter is a Los Angeles anarch, and one of Nines Rodriguez's closest and most loyal followers.

In life Skelter was a Vietnam veteran, mentioning that the kuei-jin would explain a lot of the things he saw in 'nam.

Skelter immediately snubs the player, calling the neonate a "little bitch." Should you do him a favor he will be a bit less abrasive. However, throughout your encounters his words are taunting.

He believes in the Gehenna and indicates that is creeped out by Malkavian insight. A Malkavian fledgling addresses Skelter as Helter Skelter, the apocalyptic war Charles Manson believed would arise from tension over racial relations between blacks and whites.

None of the dialog in the game gives away Skelter's actual clan, but many people assume he is Brujah because Damsel, Nines, and Jack are; as Jack says "Most of the folks here are Brujah blood". However, it seems that he is listed as Gangrel in the game files.

An irksome ghoul named Patty who has grown to be a not-so-fun problem after her master abandoned her. Skelter says her blabbing has crossed the line and requests that she "disappears." Skelter goes further to explain "I'd love to do this one myself, but I know her sire." This quest can result in loss of Humanity. 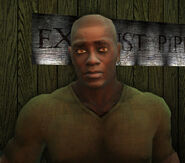 Retrieved from "https://whitewolf.fandom.com/wiki/Skelter?oldid=229673"
Community content is available under CC-BY-SA unless otherwise noted.