Sharkala the Cruel was a powerful Zmei of Russia. He was destroyed in 1240.

The cruel Zmei was also called Sharkala Red or Sharkala Sunset, for his scales glinted red, violet, and deep blue, the colors of the evening sky. His eyes were yellow. His claws were swords and his teeth were death.

The beast had spread destruction in vast proportions. No villages stood near the eastern wastelands that the dragon had chosen to be its lair. Meadows of ash, weeping trees, the bones of the dead, and the calling of crows was all there was. It is said that he once dwelled in the south and terrorized the lands of the Christian princes of Armenia and those who paid tribute to the Caliph of Bagdad. The creature once gloated he had destroyed lands from the eastern parts of Kiev to the city of the Kazans.

Sharkala was finally destroyed in a battle of epic proportions by a force commanded by the Silver Fang heroes Sophia and Yuri Tvarivich, who led an assault against him in 1240. Sharkala had already killed several Garou packs, forcing Yuri, the King of House Crescent Moon himself to take the field with his twin sister. The Tvariviches were initially accompanied by a retinue of four Silver Fangs warriors – Boris, Foma, Vassili, and Utra, but after asking for help in Kiev, they were joined by Katja, of the Black Furies, Pyotor of the Glass Walkers; Ulu, of the Stargazers; the Bone Gnawer Igor Valkof; Mehmet, of the Silent Striders; then Georges of Armenia, another Silver Fang, and finally the Get of Fenris hero Ragnor.

Before the fight, the pack also had the assistance of an old woman who provided them with magical seeds that would weaken the Zmei. In preparation for the battle, Ulu and Georges were ordered by Prince Yuri to perform the Song of Deep Sleep so they could make the Zmei sleep in case he proved to be too tough to be destroyed. Yuri showed himself and challenged the dragon, but was met with scorn. He threw the seeds at Sharkala's feet and they created great choking vines around his legs, rooting the winged monster to the earth.

Utra, Ragnor, and Boris were the first to die, as it was impossible to resist the enraged dragon's retribution after the initial clash. During the ensuing attack, Sophia was rooted to a spot by the creature's baleful gaze. At this moment, she revealed she had brought with her a legendary fetish given to her by her grandfather Tsarevich Ivan. It was the Firebird Feather of myth, and she used it to blind Sharkala. The Garou took advantage of every strength they had and fought ever vigorously, but the Zmei's claws also found Katja while Sophia was bitten to death in his dying efforts to take with him as many werewolves as he could.

Yuri's screams of revenge were drowned in the dark night, as the prince grappled onto the neck of the dragon and drove the Firebird's Feather in repeatedly, decapitating the mighty beast. However, Yuri himself was mortally wounded as he delivered the final blow, since Sharkala's gargantuan body crushed him under its weight. 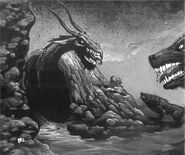 Retrieved from "https://whitewolf.fandom.com/wiki/Sharkala_the_Cruel?oldid=244609"
Community content is available under CC-BY-SA unless otherwise noted.