The Eyes of the Crone

Sergei Voshkov was a former KGB agent and acted as herald and spy for Baba Yaga upon her reawakening.

Sergei Voshkov was a premiere KGB agent and easily the most viciously effective spy in the business. With the MI5, the CIA, and various other agencies close on his heels, the master spy slid through every obstacle in his way, leaving a wake of disappearances and brutal murders.

When the Soviet Union and the KGB disbanded, Voshkov found few pleasures in retirement. Jaded by his many years in the KGB, little moved Voshkov to emotion. With some difficulty, he retained his dignity when the Hag materialized out of the shadowy corners of his elegant study.

In Russia, one hears the tales of Baba Yaga, but that does not mean everyone believes them. The stories can be dismissed as Tsarist babble or peasant ignorance, but nothing was going to dismiss the Hag. Voshkov gathered his dignity about him, met her cold malfeasant gaze and waited for her deadly iron claws to rend his body.

Instead, Baba Yaga offered him a position as her general and herald, to restore the old order of the land. Voshkov, hungry for a purpose, accepted her offer and acted as Baba Yaga's spy.

He became fanatically loyal to Baba Yaga and acted as her eye, informing her of everything that goes on. His formidable mortal prowess in espionage and warfare, combined with the supernatural powers makes him a deadly opponent even by Cainite standards. The Embrace turned Voshkov into an extremely ugly old man who is still in good shape. He hides his face behind an upturned collar, dark glasses, and a large hat.

Voshkov met his end when he tried to defend his sire from Vasilisa, the Nictuku that came for her. 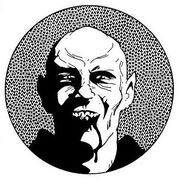 From Rage Across Russia
Add a photo to this gallery

Retrieved from "https://whitewolf.fandom.com/wiki/Sergei_Voshkov?oldid=215909"
Community content is available under CC-BY-SA unless otherwise noted.