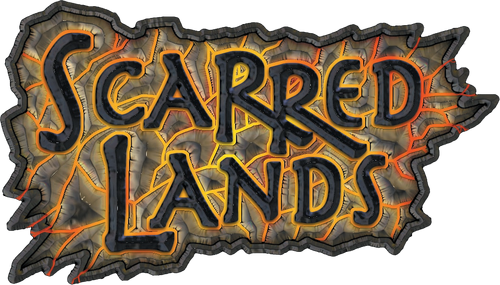 The Scarred Lands is a d20 System setting by Sword & Sorcery Studios. It was an effort to create a setting with in-game reasons for most d20 conventions, such as alignments and classes.

The world called Scarn was created by the thirteen titans. The titans drew their power from the land itself. They created life and reshaped continents at a whim.

Their children however, the eight gods, were not tied to the land, but to the people. They could not stand the pain and sadness of Scarn's people as the titans played with their lives for entertainment. So, the eight gods and one titan rose up against the other twelve titans, in what was lated called the Divine War.

The titans were defeated, and imprisoned, for it's impossible to truly kill a titan.

The battle warped the land, and what was once called Scarn is now called the Scarred Lands.

The "present" of the Scarred Lands is 150 years after the Divine War. The people are rebuilding the world, cities and cultures are prospering, and there may yet be a chance for the Scarred Lands to be Scarn once more.

In 2016, Nocturnal Media (founded by White Wolf co-founder Stewart Wieck) and Onyx Path announced a revival of Scarred Lands for both the Pathfinder and Dungeons & Dragons 5th Edition rules systems.[1]

This Scarred Lands-related article is a stub. You can help WWWiki by fixing it.
Community content is available under CC-BY-SA unless otherwise noted.
Advertisement