Santiago DeSoto was the Sabbat Inquisitor responsible for the apparent destruction of Sangris the Serpent from Montréal.

In his lifetime, Santiago belonged to a Portuguese order of Templars. A competent sailor, he was chosen as a candidate for the Embrace by the orders secret Cainite supporters. DeSoto joined the Anarch Revolt and later, after the Convention of Thorns, cast his lot with that of the Sabbat.

He was one of the first to leave the Old World, terrorizing the Brazilian coastline with his pack, and became one of the most infamous of the Sabbat who had arrived in the New World. When the Sabbat Inquisition was officially formed, DeSoto left for Montréal in order to join them. Earning a reputation as a staunch Inquisitor, Santiago was the one to lead Sangris' trial in 1992 and also the one who administered the execution per thaumaturgical fire.

He was, however, outwitted by Sangris, who had prepared a thaumaturgical ritual that swapped their bodies, leaving Santiago to burn. After his apparent death, Santiago found out that his soul was now contested by two powerful demons, Metathiax and Bothothel, both wanting to claim it. Santiago, however, managed to made an arrangement with the demons in order to deliver them Sangris and the soul of another infernalist.

Both demons agreed, and Santiago reawakened in a body similar to that of Sangris with a partial amnesia.

Lure of Flames 5, Path of Blood 5, Weather Control 4, Gift of Morpheus 3, Movement of the Mind 2

NOTE: Santiago DeSoto was originally a vampire of the 8th generation. However, once he came back from hell in the 7th generation body of Sangris the Serpent, the character sheet presented above listed him as effectively a 7th generation Cainite. 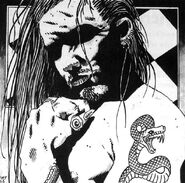 Santiago DeSoto in the guise of Sangris from Montreal by Night. Art by Christopher Shy
Add a photo to this gallery

Retrieved from "https://whitewolf.fandom.com/wiki/Santiago_DeSoto?oldid=229917"
Community content is available under CC-BY-SA unless otherwise noted.