Sangris the Serpent was the Archbishop of Montréal and an infamous infernalist.

Sangris arrived in Montréal during the Haitian immigration into Canada during the 1960s, fleeing from his pact with one of the Decani. The Sabbat had problems with the growing influence of various Setite cults and Sangris was eager to aid in the struggle against his hated parent Clan. His pack, called the "Snake-Hunters", rose to much prominence and fame. Unbeknownst to many, Sangris countered the Setite Sorcery of the Followers of Set by making a pact with the demon Metathiax, who was bound near Montréal.

With the demon's aid, Sangris poisoned the blood of various citizens of Montréal, sending most of his rivals into torpor. He blamed the Setites and set forth to destroy their temple with the aid of the remaining Sabbat, setting the temple ablaze in a magical duel with the local leader. After that, Sangris declared himself Archbishop, the remaining Kindred either too weak to oppose him or supporting him for his destruction of the Setite threat. Sangris rule proved to be prosperous, supporting the infrastructure of Montréal, attracting various thinkers to the city, and launching several crusades against the Camarilla in Ottawa.

In a daring plot, in 1978 he arranged the destruction of the Prince of Ottawa by the hands of his own Primogen, claiming Ottawa for the Sabbat as a part of his diocese. He also managed to keep most Sabbat away from the Lupine hunting grounds and the Mohawk territories, leading to one of the most peaceful times of Sabbat rule in Montréal.

Despite this, the Inquisition found evidence of Sangris' infernalism in 1992 and launched a trial against him. Although many Sabbat would have been willing to defend him, he admitted his guilt, hoping to avert damage from his childe Ezekiel and finding a way to release his soul from the pact with Metathiax. Sangris was seemingly destroyed by Inquisitor Santiago DeSoto in thaumaturgical fire, but this had been Sangris' plan all along.

He used the ritual as a conduit to possess DeSoto's body and find a way to escape the pacts he had made. Unbeknownst to him, DeSoto's soul survived and was granted a new body by Metathiax – one that looks exactly like Sangris.

Path of Phobos 5*, Path of Secret Knowledge 5*, Hands of Destruction 3*, Path of Pestilence 3*

Path of Honorable Accord 5

† Sangris is described in Encyclopaedia Vampirica as a 7th generation Cainite, while his childe Ezekiel is listed as an 8th generation. However, the character sheet presented by the Montreal by Night listed him as an 8th generation as well, which can be explained by the fact that Sangris was inhabiting the body of Santiago DeSoto at the time. 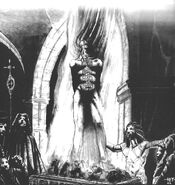 Sangris being burned by the Sabbat Inquisition. Art by Christopher Shy 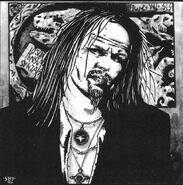 Sangris in the guise of Santiago DeSoto. Art by Christopher Shy
Add a photo to this gallery

Retrieved from "https://whitewolf.fandom.com/wiki/Sangris_the_Serpent?oldid=229827"
Community content is available under CC-BY-SA unless otherwise noted.